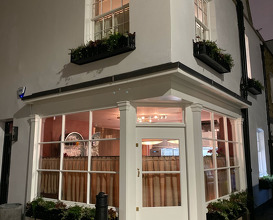 Dinner on the opening night of Tom Aikens new restaurant, Muse by Tom Aikens in a former pizzeria in Belgravia. Spread over two floors with two open kitchens with counters plus tables, this opening has been eagerly anticipated by some. Some, including myself consider that the golden era of London favourite Pied a Terre was when Aikens was heading up the kitchen there, so since closing his fine dining restaurant in Chelsea (Now Phil Howard’s Elystan Street) we have waited to see what he will do next.
Even with the benefit of soft openings where family and friends are invited, the first night of paying customers is always going to be a little iffy and perhaps just an idea of what the restaurant can be in months to come. Having said that, the service and overall experience was great. Paced very well, with confident chefs presenting all the dishes and a very relaxed and friendly vibe thanks to a perfectly judged play list and the confidence that Aikens radiates to his team.
About the food, I can’t complain, it was good but maybe not the kind of cooking that really gets me very excited. There were no dishes that stood out to me as exceptional, but none that stood out as bad. It was interesting to see so much influence and tribute so easily identified. For example the dish entitled “The love affair continues”, which is a dish of turbot and duck sausage but with a firm tip of the cap to Pierre Koffman and the late Joel Robuchon (Aikens has worked with them both) in the form of his classic pomme purée that is a signature all around the world (although Aikens says he has reduced the ratio of butter to ratte potato from 50/50).
Other elements that sent my mind rushing back to other meals I have had were the triple cooked chip (Heston Blumenthal) on a dish of retired dairy cow (Faviken) and a dessert of corn flakes and milk that took me straight back to DiverXO where Dabiz Munoz has a signature called ‘corn, lulo, vanille and the left over milk from the bottom of the cereal bowl’ which immediately sprang to mind.
Don’t get me wrong, I am not trying to snidely insinuate that these are rip offs. They are absolutely not in my view. I mean, how many hundreds of restaurants now triple cook chips? That’s not a rip off but the result of technique moving forward and a whole generation of chefs getting on board the triple cooked chip train, because they are better cooked that way.
Asking Tom about his plans to develop the menu, the way that it is worded allows him to change dishes in and out as they develop and as the seasons pass. This is good news for repeat customers. He says he will further develop a couple of the dishes to become permanent signatures.
Perhaps one criticism would be that putting six people at the upstairs counter is quite a squeeze. I found myself banging elbows a fair amount with the diner next to me and the wall as I was on the end. However, when booking, make sure to book upstairs as this is the main hot kitchen where Tom is doing his thing and schmoozing the punters. Down stairs seems very much like the cheap seats with just a small pastry/ cold section also with counter seating. So if you want some hot Aikens action then book upstairs for sure.
Overall good, I’ll probably head back in 6 months. 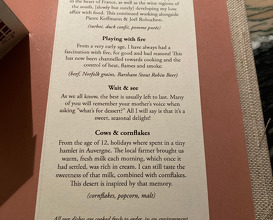 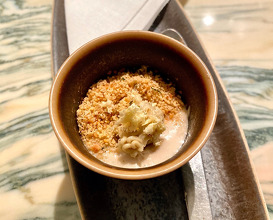 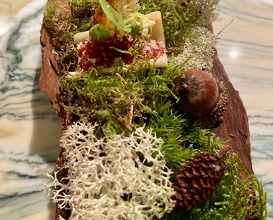 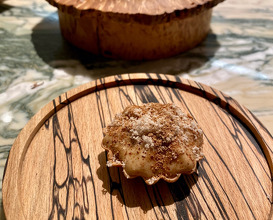 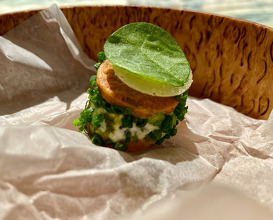 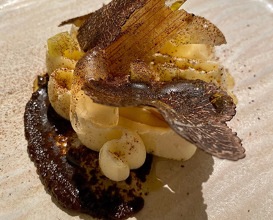 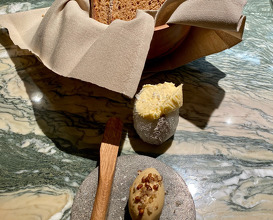 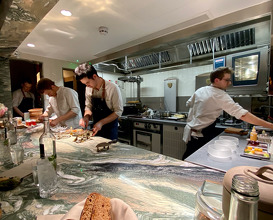 The view from my end counter seat 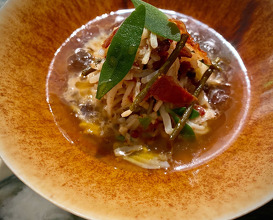 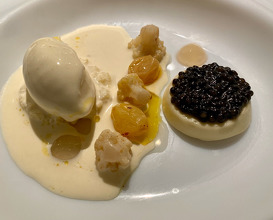 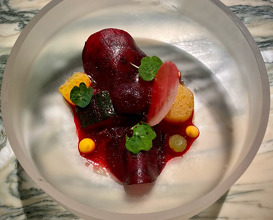 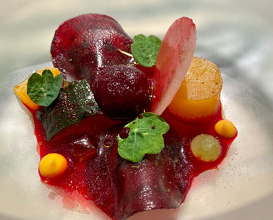 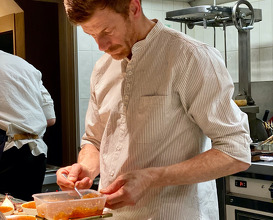 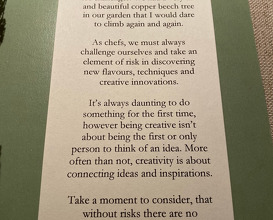 Some philosophy behind one of the dishes 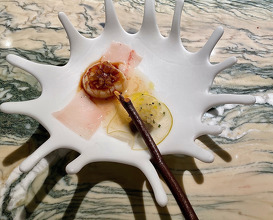 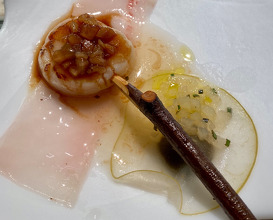 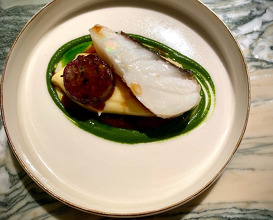 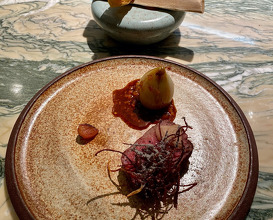 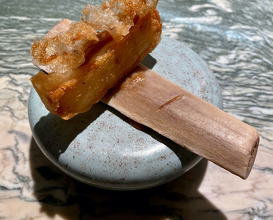 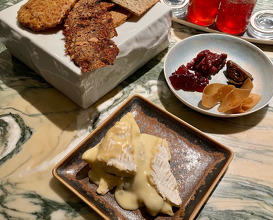 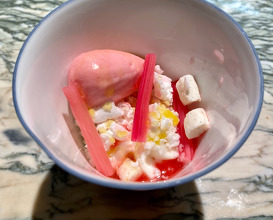 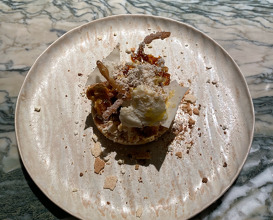 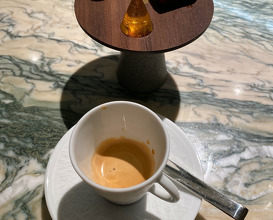 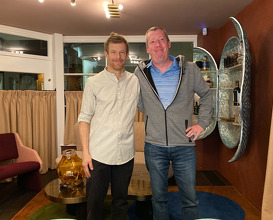