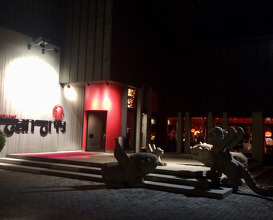 The final year of Hans Haas at Tantris

I have not seen the menu for decades, I actually don't remember ever looking into it. When I call to make a reservation the Team around Hans Haas knows what to do, Create for me an extended menu of whatever they think is best on this given day. I must have more than 80 of Hans' handwritten menu at home.

The cuisine is classic French with excellent ingredients and luckily (or ironically for me) with hardly any Japanese influence. In fact only one course had one Japanese component, the Yuzo in the first dish, the variation of Crustaceans. The execution is always perfect and the temperature is correct. The Variation was served almost like a seafood salad and the Arctic char (Saibling) was just hand warm, just melting in your mouth. Hans Haas is also one of the few people who know how to cook big pieces of meat, his lamb côtelette was so flavour full and just perfectly cooked to the point. This food does not surprise you, it does not wow you, but it is like coming home. It leaves you deeply satisfied.

I deeply regret the decision of Hans Haas to retire at the end of this year, after standing in the kitchen of Tantris with its 50 year old equipment for almost 30 years, to stop cooking and apply himself to his other interests. This announcement made a table at Tantris the hottest commodity in Munich. Luckily, I have already booked as many as I could for the remainder of this year.

The retro ambience of Tantris 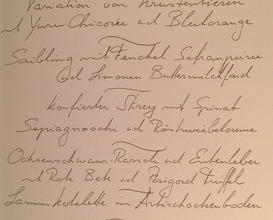 One of maybe 80 hand written menus I have 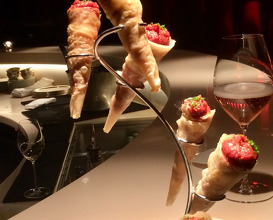 The classic start - a cone with veal tartare 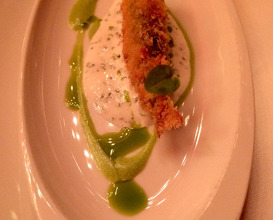 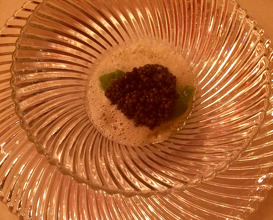