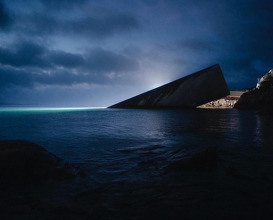 Dinner at Under Lindesnes

This is not a meal, this is a journey.
A journey below the surface of the cold ocean in Norway, 5.5 meters below to be precise. It starts with coming to Lindesnes, the town closest to the restaurant, a beautiful drive from the airport leads through a rugged landscape, broken up by bays and lakes. The final stage is a walk along the bay approaching a structure which looks like a subway carriage which was partially submerged into the ocean. Once you entered the restaurant you get embraced by warm wood paneling. There is a stop half down to the bottom of the restaurant to have a glass of champagne. One can just see the surface of the water through a window and feels like standing in the ocean deep enough to just barely have the head above the surface. When you continue your journey to the dining room you descend a stunning wooden staircase. All furniture is light wood, no really unexpected in Scandinavia, but wonderfully shaped and curved. You marvel about the 35+ meter wall to ceiling glass windows which allows you to become for the duration of the meal part of a large community eating, the one inside the glass a tiny group of 35 humans, but outside the 30 centimeter thick glass wall hundreds of ocean creatures. I am not sure what it is, but almost all humans can watch a burning fire, ocean waves and fish in an aquarium for hours without getting bored even though nothing really happens. The creators of this restaurant managed to tap into this into our DNA hardwired reaction of ours and use it to full extent. One does not get tired of watching the fish which restlessly move from one side of the huge glass window to the other. The lumpfish male protecting the egg his partner deposited right next to the window hardly moves away from his spot. It does not take long, after you are seated that the calmness grows over you. People are so mesmerized by this spectacle that you hardly see anybody on their phones. It is like going to meditation class.

Ah, and before I forget, there is food too. Danish Chef Nicolai Ellitsgaard must have been hiding somewhere close to where he cooks now. Yes, he was at Henne Kirkeby Kro, most likely called lovingly “monkey” by Paul Cunnigham, and Måltid, but was certainly on nobody’s radar to open up a world class restaurant. He is now involved for years with the Under project and it shows. In his first season and menu, he has already developed a series of signature dishes which show pure genius. The 22 course menu oscillates between seafood, meat and vegetables, all locally and sustainably sourced. He also tries to use and refine some products which normally are by-catch like his squat lobster (very tasty). He starts you off with Limpets served on a rock which resembles the aquatic snails to the point that you can barely distinguish them. And perfect snack, great texture and taste, to get you going. The 150 year old mahogany claim, very often chewy and served with a sauce which demotes them to pure texture, was cut finely, Japanese style, to enhance the sensation in your mouth and served in a subtle sauce of green strawberry and aged chestnut. Complementing and not overpowering. The Langoustine gets glacéd with fermented honey, executed perfectly.
All great dishes but two of them were truly outstanding. Nicolais’s version of Fiskepudding is amazing. A completely different dish from what you normally get. And his first dessert a structure of 7 seaweeds, different tastes, different preparations, are weaved together into an amazing bite.
An astonishing addition to the Scandinavian food revolution, which now dominates the European scene to the extent the “Spanish Age” never could.
Kudos!