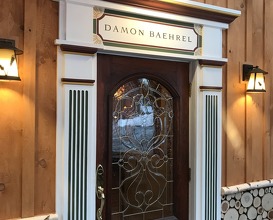 with Gabriel Fanous at DAMON BAEHREL on 27 December 2017

What a delightful scam!

Damen Baehrel runs a tiny restaurant in upstate New York. He calls his cuisine Native Harvest as he claims to source everything from his 12 acre property surrounding his small house which also includes in the basement his restaurant. He is a great guy, easy to talk to, a genuine host, obviously passionate about his work and regales his guest with great stories. A extraordinarily long meal goes by quickly. And you leave the place with a good feeling.

He is however a much better scammer than cook. Here are his claims
1. He cooks the 25-27 dishes all by himself for a table of 4 in 7 hours. At the same time he serves the dishes, pours the wine and cleans the plates.
2. He produces everything himself except the meat and the seafood or fish which he sources from various unnamed suppliers.
3. The process of producing flower out of acorn takes him up to 18 months.
4. For acidity he uses pin needles although he now had gotten his first harvest of small lemons from a tree he keeps somewhere in his house.
5. We started our meal at 4pm (and left shortly before midnight), he claimed that he had another party before us and had 40 minutes to clean and prepare for us.
6. He also claims to have thousands of requests for a reservation that he closed his reservation and waiting list in 2014.

So why do I think this is all a scam:
1. Why would somebody spend 18 months producing flower out of acorns just to produce a focaccia which taste like a normal focaccia which I can buy in the super market 3 miles down the road? His day must have 60 hours because each step takes forever and there numerous of them.
2. Every dish gets introduced with a 2 minute story about the production. All is completely differently but looks suspiciously similar. There is the pink, the orange and the green sauce. Clearly the very strict no photo/video and note policy comes in handy because with the exception of Le Wang nobody could possibly remember all the ingredients of the 2 minute speech of one dish, left alone 25 of them.
3. He claims to produce over 30 different cheeses of which we got served 13, not one of them memorable. I don’t even know an industrial cheese producer which produces that number of entirely different cheese, but this one man show can do it?
4. I turned up at 340pm, 20 minutes ahead of time and had to wait in front of the property gate. There was no car coming out and when I entered the dining room no smell of food or people, unlikely when somebody just feasted for 5 hours.
5. Damon lets nobody into the kitchen to look at it. We specially asked to see the prep kitchen in the adjacent building. This request was denied because his wife and disabled son would be there and we would disturb them. I was seated in a way that I could see the building all the time. During our 7 hour meal not one time was there a light in the entire building.
6. The wine gets served out of bottles. Interestingly whenever the wine is more expensive the wine bottles were already open. A half bottle of Veuve Cliqot (maybe $17) was opened while the magnum Coche Dury and the Chateau Yquem 1999 was all served from an already open bottle.

I would not want to go so far as to say that even his claims of food processing are false. They may be lies but even if there weren’t I simply don’t get the point of it. Why go to these lengths to produce food which when served blind in a nondescript restaurant would be certainly called mediocre?
I am however convinced that the story of his waiting list and his multiple meals per day are complete hyperboles designed entirely to make a remote restaurant a destination where he can charge $395 per person when down the road it would cost $50.

Don’t get me wrong, we had a great experience, lots of laughter and genuine interesting conversations.

I left feeling good, but then I always liked a good magic show. 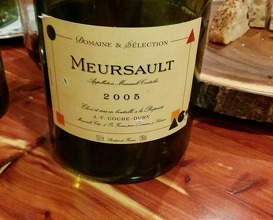 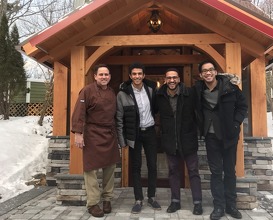 The Bistro in the Basement