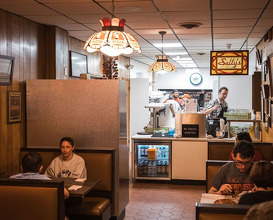 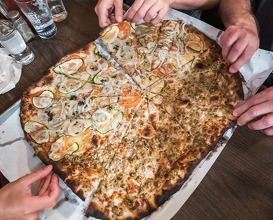 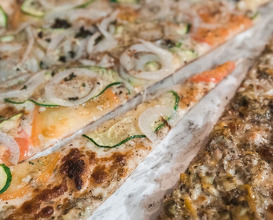 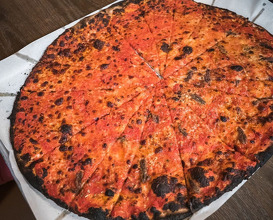 Ever since we watched the Pizza episode of "Ugly Delicious" on Netflix, we were very curious about New Haven. The city was featured in the show, and we previously had no idea that there was great pizza to be had in Connecticut.
✧
At the turn of the 20th century, New Haven became a popular town for Italian families who settled in the US, and they preferred the thin-crusted Neapolitan style pizza of their homeland. Sally's is one of the original Big Three to start the whole New Haven pizza movement back in 1938 by Salvatore Consiglio. Back in the day, Frank Sinatra was a regular here and this was his go-to spot. Today, their pies are still baked in the same coal-fired oven that has been in use for over 80 years. And Salvatore's two sons, Richard and Bobby, continue to make the pies and look after the store.
✧
We arrived at 5pm and waited 1.5 hours in line before receiving our two large pizzas - one original tomato pie and one split with vegetables and white potato. One thing is for certain, the Sally's tomato pie reigns supreme. It's the benchmark for which any tomato pie is measured, thanks in part to a house-made tomato sauce with a proprietary blend of tomatoes. It was an instant hit with our table; we devoured the whole thing in a matter of minutes. And since we came all this way, we had time to try one more New Haven pizza spot before going back down to Manhattan. ?
_
Sally’s Apizza, New Haven (July 2019)
#cityfoodsters_newhaven
#cityfoodsters_sallysapizza
_
#sallysapizza #apizza #newhaven 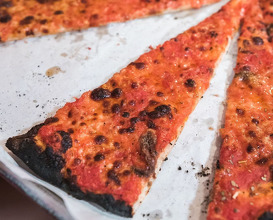 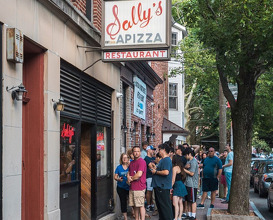 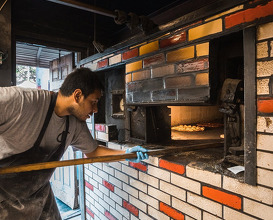