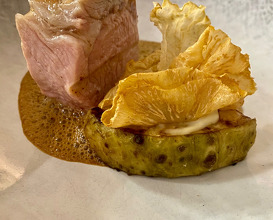 Grand Kobel - the annual pop up in Vienna of Taubenkogel

Barbara Eselböck and Alain Weissgerber are arguably one of the foremost hosts in the world. Luckily in the wintertime when the surroundings of Neusiedlersee, where their hotel and restaurant is located, gets quiet, they pick their gear and staff and move for six weeks to Vienna.

It is a much beloved tradition now for local and international guests to indulge on a grand evening. Because when Babara and Alain get started, nothing is left to chance. This year they converted an old ballroom from the former Hotel Donauhof, which was used as a storage room for wood (!). In an unbelievable short time they converted it into a Grand Ballroom with beautiful decorations and to top everything using light fixtures from Lobmeyr. Make no mistake, these lights are the exact ones which are hanging in the Metropolitan Opera in New York City. The staff including Barbara wear costumes which fit the occasion and time the evening is set in. Marvellous.

And the food is what you would expect from a winter menu of Alain. Rich, full of flavour and umami, perfectly executed and very, very tasty. Alain starts you slowly with some fresh and light dishes, like trout and radish, moves you then through some delightful dishes like poppy, mushrooms and cream until he arrives at his pièce de résistance, the dairy calf which he cooks in a big piece in his oven. What a fantastic dish, sweet, soft, savoury, perfectly cooked. Together with the fried celery and the Maggikraut, it was simply delicious. Alain is one of the dwindling group of chefs who can actually cook a big piece of meat without using water or other technical assistance. It is regrettable, but it appears that this skill does not get taught anymore. But as long as Alain and a few others like Hans Haas in Munich is holding out, there is hope for a meat lover like me.

A fantastic evening in a wonderful ambience, hosted by Babara, one of the best FOH hostesses I know and with great food by Alain. I would love to sign up for the 2020 pop-up right now. 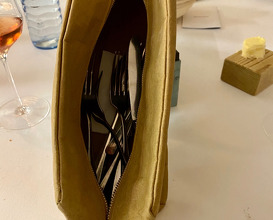 This work is licensed under a
Creative Commons Attribution-NonCommercial-NoDerivatives 4.0 International License.
Copyright © 2023 Foodle. All rights reserved