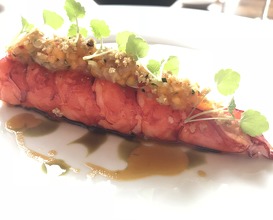 Chef Daniel Schimkowitsch is one of those young German Chefs who go different ways. Already in his first place in Munich, the Tramin, he introduced the concept of Gourmet Casual to German and deservedly received one star in the Guide Michelin. In 2014 he moved to the wine region of Pfalz and opened the restaurant L.A. Jordan which he very generously opened for us for a special Saturday lunch for which I am very thankful.
The restaurant, which name sounds like a basketball shoe but is a reference to a German politician, is super modern and flooded by light. It is part of the beautiful hotel Ketschauer Hof but in a separate building. The atmosphere is casual with parts of the dining room without table clothes. The front office wears jeans and a top from Le Noveau Chef.
The food is more ambitious than it was at Tramin, the products sourced from one of the best suppliers in Germany and the execution flawless. His combination of flavours is sometimes surprising but always pleasing. He likes to add a certain kick to some of his dishes but always stays below the threshold which would render the dish too spicy for some diners.  He developed further his signature and has now something which recognisable as his. Dishes like his Burnt Beef and his Carbonara are already classic dishes which are in high demand by his customers. I am somewhat disappointed that the GM did not give him a second star in 2018 because he certainly deserves.