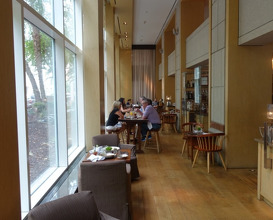 Reportedly The Blue Duck Tavern is the only Michelin starred venue in Washington DC to serve breakfast and brunch.  For that reason, it would have been a crime not to pop in as I had time to kill on my Sunday morning in DC.  Ultimately it is very much a swish hotel restaurant (in look and feel) and the service was confidently proficient but sadly it was a disappointment on the food side.  Obvious care had gone into the products and the hotel couldn’t have been more accommodating to make my visit enjoyable, but some of the products were off the mark for me and as always, I’ve expanded on this at the expansion button for more detail.  Very well-done place in general though and I fully acknowledge that had I come for an evening tasting menu, it may be a very different experience and overall verdict from a brunch menu.

After being told on the phone that morning that the restaurant was fully booked for brunch I turned up anyway on the off chance to not only be led straight in but a surprising amount of tables free.  The chairs at the lower tables are genius as they are rotating mini-arm chairs and in my morning after condition, that was just fine with me! Pretty cool as haven’t had that before and I suppose that’ll happen at a 5* hotel.

After being told on the phone that morning that the restaurant was fully booked for brunch I turned up anyway on the off chance to not only be led straight in but a surprising amount of tables free.  The chairs at the lower tables are genius as they are rotating mini-arm chairs and in my morning after condition, that was just fine with me! Pretty cool as haven’t had that before and I suppose that’ll happen at a 5* hotel.

On to the food and as usual, I ordered way too much in order to get as much of a feel for the menu as possible and Short rib hash with olive oil-poached egg with horseradish was well done.  It’s a fairly heavy, dark beef dish to have in the late morning but the horseradish sauce underneath was very good, but if only there was more(!).  I found myself having to forage around for the horseradish in the hope of finding more and the egg was slightly over done (not runny the whole way through).  I also forgot that the word ‘biscuit’ in America refers to scone for those in the UK and this was nicely done (not ludicrously dense but wholesome at the same time) and the pineapple jam was an absolute killer! So much more interesting than normal strawberry or raspberry jam.

Unfortunately, two bits that weren’t my cup of tea were the bacon which was hard and without the essential crispy fattiness that I simply prefer my bacon to be.  Perhaps this is usual to be served hard but texturally, for me this is a crime with one of the world’s greatest flavours and food products.  The other matter was the grits which I was intrigued about and the staff very kindly gave a side just to taste, but unfortunately this really wasn’t my thing either.  It’s very popular in the US and is essentially a savoury porridge made from corn, but even with a dose of cheese within I still found this completely bland and only just salvaged by the caramelised onion blob in the middle, but even this didn’t lift the overall effect.

Finally, I absolutely had to try one of my favourite brunch dishes as well just to see the variation of how it was done and that was the eggs benedict; something I happily spend a good 30 minutes making myself if the hollandaise is going to be done as beautifully as it can be.  I think the idea of having the pulled pork was a good one but this seemed to have a pickled glaze and along with the gherkin, mustard (within the hollandaise), Swiss cheese and cayenne pepper produced a far too biting and vinegary overtone for the morning.  Almost everything, including the cheese needed toning down and unfortunately there was basically nothing on this version of eggs benedict that I truly enjoyed.

However, the hospitality and overall feel of this restaurant is very pleasant indeed.  Based on how everyone attends to you as you enter, are shown around and served, I have no doubt this will be a lovely place to try lunch or dinner especially with cocktails outside on the terrace.  And like I said, dishes on the tasting menu will have a lot more opportunity to stretch the taste buds.

The Blue Duck Tavern side area 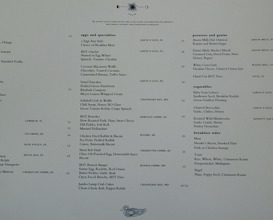 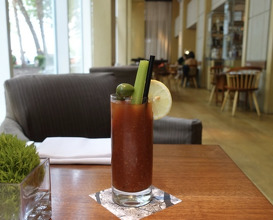 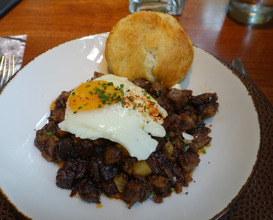 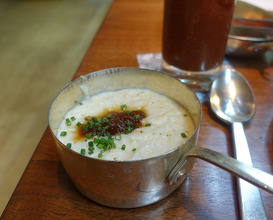 Grits side with caramelised onion 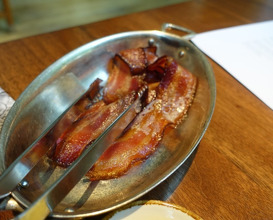 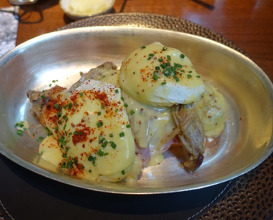 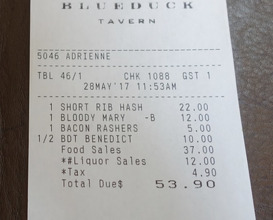