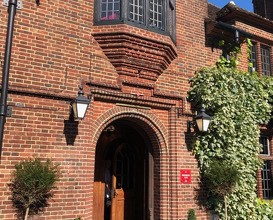 The Fordwich Arms is a riverside pub just outside Canterbury headed by Dan and Natasha Smith.   The couple took over the Fordwich Arms in 2017 after leaving London and the kitchens of Jason Atherton and Isaac McHale’s Clove Club and received its first Michelin star in the 2019 guide.  This is a charmingly cosy pub with attentive and charming staff.  Lunch on my first visit was £45 for myself and the dishes showed skilful designs and some pleasing impacts causing a definite feeling for me to return for the full menu at a later stage.  A very good first visit and well deserved of its shiny, new star.

The average 3 course a la carte meal will cost around £55 pp, the full 8-course tasting menu £95 and if you go at lunch on the w/e there is a set 3-course meal at £35 for best value for money.  I chose to do none of those(!) and actually liked the look of three of the starters so I did that instead which worked out at £45 with no drink but included service, canapés, homemade breads, coffee and petit fours – this is quite fair with food at this level.

The average 3 course a la carte meal will cost around £55 pp, the full 8-course tasting menu £95 and if you go at lunch on the w/e there is a set 3-course meal at £35 for best value for money.  I chose to do none of those(!) and actually liked the look of three of the starters so I did that instead which worked out at £45 with no drink but included service, canapés, homemade breads, coffee and petit fours – this is quite fair with food at this level.

Sat opposite a log fire on a chilly afternoon was a very pleasant way to start the canapes which consisted of three snacks.  Black pudding beignet with sherry vinegar, apple and mustard was delicate and pleasing.  Smoked cod’s roe, seaweed and oscietra caviar had a lovely addition of pickled gherkin for the onslaught of smooth roe and a tartlet of Canterbury cobble (cheese) with pickled walnut had a beautiful punch of cheese in extremely thin pastry.  A very good start.

Homemade breads were malt sourdough & treacle soda breads, home churned butter, with an onion dip made from reduced onions and with local ale (very nice).  The final spread was pork fat with marmite and shreds of maple bacon.  Normally I don’t enjoy marmite but this was beautifully sweetened, subtle and offset by the maple cured bacon bits in a great way. So far, so great!

Duck liver parfait was the first starter served with clementine, Sauternes and warm doughnuts.  This was well done and the pickled onions and clementine gave a very good balance in lieu of a chutney whilst parfait was not lost.  The doughnuts themselves were a novel replacement for the usual brioche – beautifully soft and releasing a lovely aroma through the steam when torn open.

Local white crab with pickled cucumber, Kentish cider jelly and hollandaise was a clear choice to be asked for in the Spring.  Not mentioned on the menu were buckwheat seeds which have a particularly gritty crunch which was a surprise, but even more was a piece that felt even harder.  This, sadly turned out to be a piece of crab shell instead.  Another piece of crab shell put me off eating the remaining half of the dish.  Aside from this, the dish was clearly impressive to the eye, but the hollandaise could have had more impact through the cider gel as could the crab, so this was the lower end of the meal.

Finally, seven score asparagus, brown butter, lardo layer, wild garlic, wild garlic leaves, puffed rice and cooking juices of the asparagus was thankfully a triumph.  Interesting to have green and white asparagus on the same plate to get the difference between them (white asparagus is slightly more fibrous and unsurprisingly, with a less grassy flavour) and these were both pleasant.  The wild garlic was super and not overpowering at the same time and all elements tied up together nicely.

As I was in a rush at the end, I forwent dessert and took a chance that petit fours would come with the coffee, which, indeed they did and this, therefore, became my dessert as hoped.   Coffee was lost sheep coffee, a local brand from Canterbury.

Although I could only manage three small dishes (starters) on this occasion and one of the three turned out to be not great, you would think this was grounds for the score being barely above 60%.  But, the technical ability in the breads, spreads and canapes go a long way to the whole and measure of the venue when all other components are skillfully done as indeed these were.  The crab shell was unfortunate but this can happen.  Having said that I was a little surprised that after I pointed this out and clearly stopped eating the dish halfway through as a result it was still charged at the end.  But then again, here is a good lesson to ask the staff’s views on what to do when this happens or a dish can only be half eaten at the time.

I was generally very happy with this visit and it is well on my radar to return to do the whole treatment next time and in the summer.  If you find yourself driving here which will be the case for most visitors I assume given its rather tucked away location, give yourself an extra 20 minutes to try and find a parking space somewhere near. 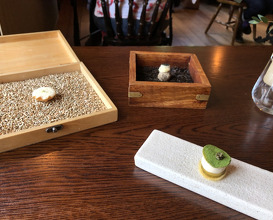 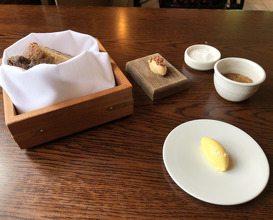 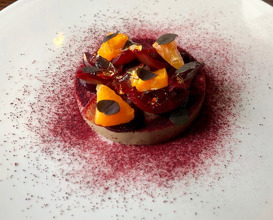 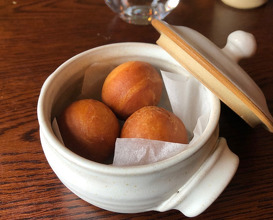 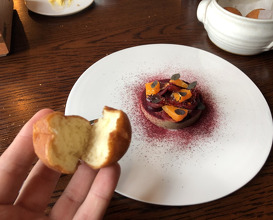 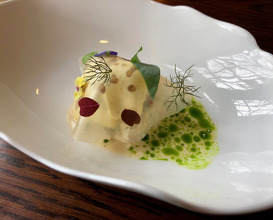 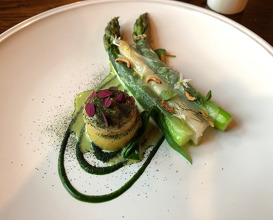 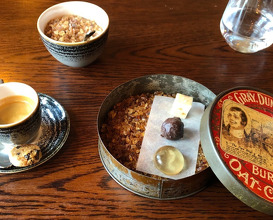 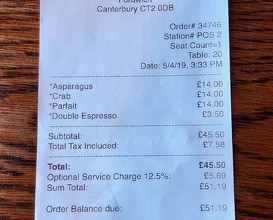 The lunch bill for 1, no drinks 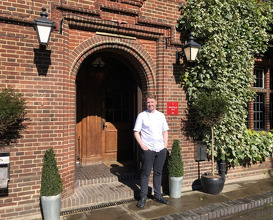