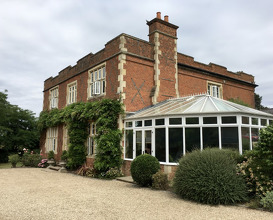 This is my first time to L’Ortolan and the headline is that based on this superb set menu performance, it is definitely worthy of more attention in the future.  The three course set lunch included opening nibbles, an amuse bouche and a pre-dessert making it feel like a six course lunch but moreover, the flavours were in the main very pleasing.  It is mainly suited for more notable occasions and the conservatory dining area is nice and light.  This visit demonstrated one of the best Michelin starred set menu experiences that I have had on my travels for good value at the same time although the one area I thought it could improve was being a little more relaxed.  Thoroughly recommended set menu lunch.

The opening snacks of sweet pepper macaroon and spoonful of tomato and celery were interesting and did their job of waking the senses up, but the incredibly light and crispy chicken skin with truffled mayonnaise sent my head spinning in to immediate happiness.  So that wasn’t a bad start!

The opening snacks of sweet pepper macaroon and spoonful of tomato and celery were interesting and did their job of waking the senses up, but the incredibly light and crispy chicken skin with truffled mayonnaise sent my head spinning in to immediate happiness.  So that wasn’t a bad start!

Goat’s milk is used for the butter and gave a cheesy quality with some nicely done bread including salted focaccia with rosemary (very good) and the amuse bouche of trout which I could be wrong on, seemed like it may be slightly away from the norm, was however, lovely at the same time with the dill, texture of the crispy skin and moisture from other components.  Gloriously pickled beef tartare made this a very interesting version and the egg yolk shavings reminded me of how this is done in Bonhams.  If there was one thing about this I would have preferred, it was to be slightly less minced as anymore and it would have been in danger of being like a paste and being more lumpy for me brings it out the ‘steakness’ more.  The fermented cep that was sprinkled on in powder form at the table was stylish but in truth, I could not taste any of it with the power of the pickled vegetables so this turned out to be more for show.

The pork was wonderfully succulent (one of the most succulent I have had) and with hash brown and crackling and perfectly balanced pineapple chutney (not too acidic or overpowering) made this a delightful main.  The only aspect of this that I didn’t enjoy was the skin on the stand alone piece of pork as this was quite chewy (almost rubbery) rather than the sheer perfection and crispiness of that experienced at say, Rogans.  A small dent in an otherwise very enjoyable dish.

The white chocolate foam (with blueberry compote) pre-dessert was absolutely fine and the decoration and design of the peanut parfait, salted chocolate and cherry dessert was very pretty but I was worried that there were too many components on the plate to make it confusing.  As it turned out, the most noticeable thing on trying, was that the parfait was hard to get through (the force needed made the spoon hit the plate at a seeming 100mph with a porcelain clang loud enough to make other diners jump) but also once all parts were on the spoon, they actually did go very well together – although a very busy plate, I thought this was overall exciting (wonderful mix of textures) and very nice on the taste buds.

So that was the food – a veritable thumbs up.  Driving prevented any drinks but it was very good to see that you can actually have Puligny Montrachet by the glass for £20 and the service in general was very attentive.  If there was one aspect I thought could be toned down slightly was the formality and the need for some staff to check the stance after every course and show noticeable desires for recognition when engaing in general.  Although most probably well intended, this isn’t required and it will make the diner feel too prodded.  In my experience, the pinnacle of service comes from being graceful, attentive and unobtrusive (best experiences for this by far have been Le Gavroche in London, Robuchon au Dome in Macau, Arzak in San Sebastian and floor manager at The Waterside Inn for example) but in the main, the first two of these attributes were very much seen at L’Ortolan.

Overall, this was a very strong performance from a kitchen in the top bracket of its 1 Michelin starred family.  The value for money for this lunch and the return on flavour was actually superb and is highly fitting for a romantic treat or celebration occasion such is the layout of the venue.  A great lunch here with plenty more to offer I have absoutely no doubt. 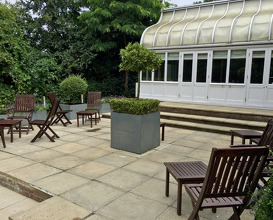 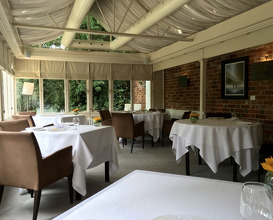 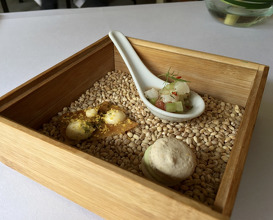 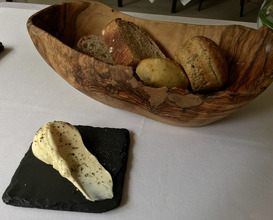 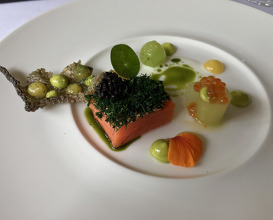 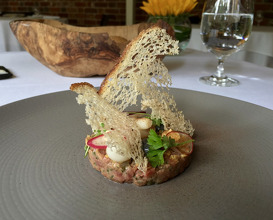 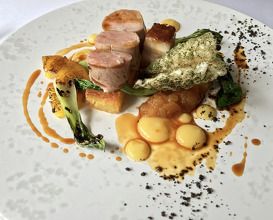 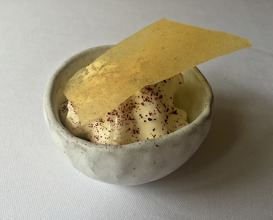 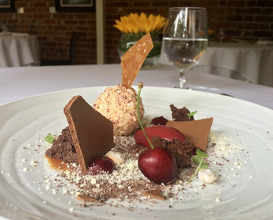 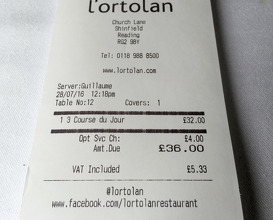 The lunch bill for 1 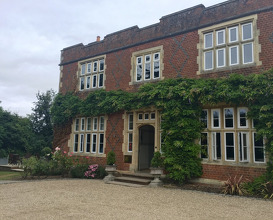