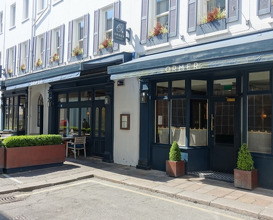 As at time of writing,  Ormer is one of three Michelin starred restaurants on the island of Jersey.  Ormer was my lunch venue for this visit to the island and aside from the slightly formal interior décor, this represented a superb value for money option and a prime example of where I would steer someone to be less intimidated about Michelin starred dining for the hugely reasonable set menu lunch at £27 for 3 courses plus opening snacks.  As ever, more detail on the meal at the below button, but ultimately, no bad issues here at all on the food and I was indeed delighted to see the definitive Jersey Royal potatoes proudly served as a side, glazed in butter and decorated in mint.

From local fields in Jersey, barely 3 weeks in to the ‘tattie’ season, with a pleasing and well crafted meal at the price, it really was everything that you could wish for at a Michelin starred eatery.  I must get to the London branch at some stage seeing as though Exec Chef Shaun Rankin has had that opened in Mayfair since Oct last year!

From local fields in Jersey, barely 3 weeks in to the ‘tattie’ season, with a pleasing and well crafted meal at the price, it really was everything that you could wish for at a Michelin starred eatery.  I must get to the London branch at some stage seeing as though Exec Chef Shaun Rankin has had that opened in Mayfair since Oct last year!

An interesting trip to Jersey in general, where I learned that non-standardised taxis are horrendously expensive (worse than london), you can get from end of the island to the other in roughly 30 minutes by road, no matter what you earn, your tax bracket is a mere 20% and the islanders don’t consider themselves part of the UK – fact, according to one of my trusted cabbies.

This set menu lunch was a pleasing affair because it felt (and was) skillfully delivered but wasn’t stuffy or too small as a result – very often set menus are the size they are due to the price and a restaurant will barely make much money from these lunches but this was certainly substantial enough.  I was particularly impressed with the one course, one glass of wine in one hour lunch time express menu for £19.  This would no doubt include a snack and bread and with water and wine is a wonderful option to offer.

A couple of savoury chiros which were freshly made and warm had a good fragrance of parmesan inside and grated on top as opening snacks.  Brown and white home made breads came warmed as well as some marvellously golden Jersey butter that practically made the bread the excuse to have this.

A very well chosen Sauvignon Blanc from Italy was recommended by the Sommelier which went very well with the salmon tartare, the latter having a fair degree of sweetness from the ice cold cucumber sorbet.  This was an interesting touch not had before with salmon tartare which, apart from nearly causing an ‘ice cream headache’ was a fresh flavour and compliment to the salmon.   The cod main was great.   Perfectly cooked, with a salty, crisp exterior, I could have had this on its own but as it happened, the chorizo was lovely touch to give it interest and even more seasoning and along with the avocado purée, it was a very good combination.

The Jersey potatoes were, understandably,  as good as they as they come having been dug up that very morning from nearby fields as this makes it considerably easier to wash for one.  The head chef  (Lee Smith) regailed to me afterwards that this was the other bonus of having from the ground literally hours before, in that the soil simply falls off when washing as opposed to potatoes that have been allowed to store for a week or two which need brillo pads, up to industrial sanders to clean off properly.

Finally, the strawberry soufflé was lovely and strong sweetness was just about dealt with by cucumber ice cream which was a pleasantly fresh combination.  I thought the strawberry coulis was a bit bland but a very nice decoration and supporting textural support to the soufflé none the less and the best thing on the dessert were perhaps the strawberries themselves being so utterly ripe, sweet and juicy….sorry Mr Soufflé, you were lovely but the strawberries just stole the show.

The staff kindly let me simply get on with things on my laptop in the upper terrace with coffees afterwards which came along with some nicely done macaroons and petit fours.  Apart from having to continue to ward off a persistent pigeon obsessed with my sweets, sat in the enclosed terrace was a perfectly pleasant way to finish the meal and along with staff who continued to be attentive with routine visits up to the terrace (good hospitality), this rounded off a highly satisfying, value for money lunch that had a very good rate of return.  I am now basically way more incentivised to get myself to Ormer in Mayfair and see how the format is at Flemmings Hotel and I have no doubt the a la carte and tasting menus at this restaurant would be exciting. 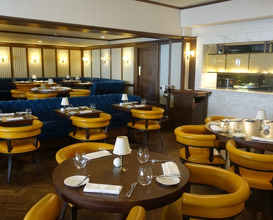 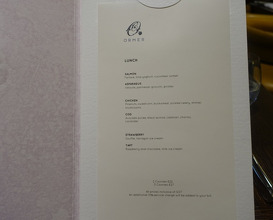 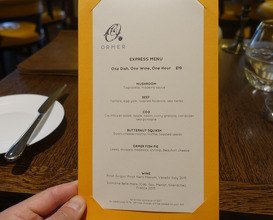 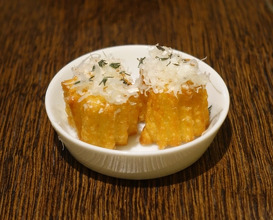 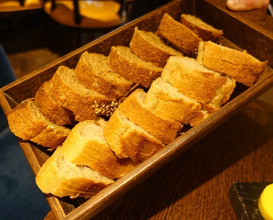 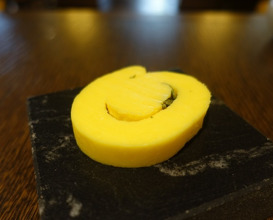 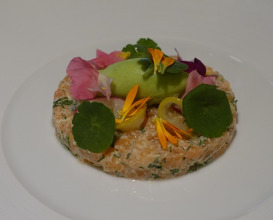 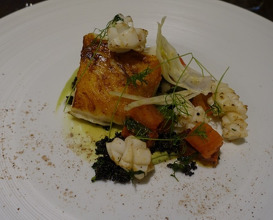 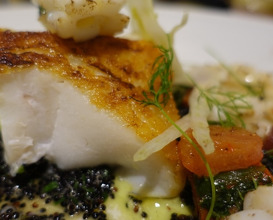 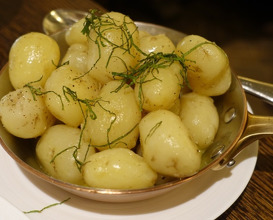 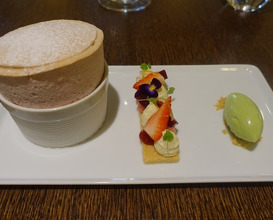 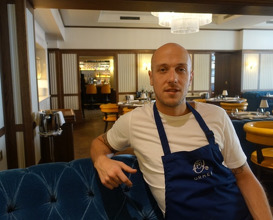 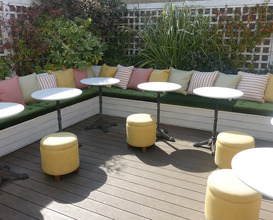 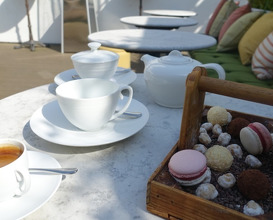 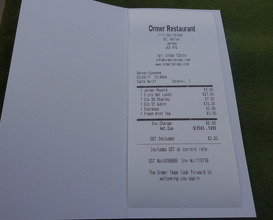 The lunch bill for 1 including wine, coffee and petit fours