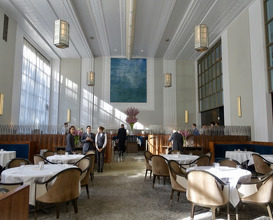 I had heard so much of this restaurant prior to coming which, in the past has created let downs in general.  But, this former life insurance headquarters overlooking Madison gardens officially became my favourite 3 Michelin starred venue of the 5 that I have visited so far in the Bay Area, Chicago and New York.  With its high ceilings and recently renovated interior (2017) adding more room to the bar for dining, there was something most pleasant about the entire feel of this well-known high end restaurant.  World class service combines with a fun and non-stuffy approach which I thought hit the sweet-spot.  At $312 all in for what turned out to be a seven course tasting menu with two ordered snacks, plus wine, plus tax and service all in, this was actually very good value for money.  All notes on the dishes are at the expansion button and whilst not every dish blew socks off (this is quite hard to pull off in any case), I would actively seek a seat here again above all others visited in the US thus far.  It is safe to say that the chances of all having a good time here are very high.

Eleven Madison Park has been open since 1998 and was bought by the current owners in 2011, earning 1 Michelin star.  The very next year it made headlines by catapulting from one to three stars in 2012 under its Exec chef Daniel Humm and it has maintained being in this precious tier ever since.  A long awaited facelift in the kitchen and bar area took place in 2017 and dining is available in both bar and its main hall 7 days a week (lunch at weekends only).

Eleven Madison Park has been open since 1998 and was bought by the current owners in 2011, earning 1 Michelin star.  The very next year it made headlines by catapulting from one to three stars in 2012 under its Exec chef Daniel Humm and it has maintained being in this precious tier ever since.  A long awaited facelift in the kitchen and bar area took place in 2017 and dining is available in both bar and its main hall 7 days a week (lunch at weekends only).

For my seat (on my own) I had a corner table in the impressive bar overlooking some guests who had come in to the bar for drinks only and one or two either gaining a lucky seat in the bar when all else was full or opting for the lower tasting menu (available in the bar only) deliberately.  After deliberation with my very capable waiter, I opted for two of the snacks as they simply sounded too good on top of the shorter tasting menu of five courses (you will need to decide which menu to go for when booking through the online booking tool called Tock).  Menus in the dining room can go upwards to $335 per head for up to 10 courses and in the bar, the shorter 5 course menu can be had for $175 per head as a much more reasonable offering.

Prior to my snacks a box arrived on the table, containing and cheese and apple cookie.  This was a very pleasant amuse bouche that did its job well and was a good opening welcome.  My snacks themselves were beef tartare with foie gras in marrow (served inside the middle of a hollowed out cow’s bone) and black truffle tart with cheddar.  Here was the first dichotomy I faced: as silky as the foie gras was, the sheer sight of how much there was to get through, coupled with the size of the truffle tarts would put almost anyone in a state of terror at the amount to have to handle.  The steak tartare was pleasant and had a small acidic kick to it but ultimately, with the sheer volume of foie to devour, it was overall too vastly fatty a helping in my eyes.  The cheddar cheese and truffle tarts were very good with beautifully thin bases and a well-balanced topping formula, but with both snacks being $30 each, I almost wish I was warned how big they were or perhaps the portion sizes here could be toned down along with their snack prices as a more appropriate pitch which I think would also go down better in both senses with your average diner.

First of the main menu was billed a corn soufflé but was ultimately more like a crème brûlée with bonito (mackerel variant) and caviar and corn.  This was absolutely delicate with beautifully constructed mini muffins and a winning dish.  It was clever, rich and I did like the sweet ham jelly inside complimenting the lemony hollondaise on top – a thee star dish without question and I believe is also one of their signature staples.  The butter for the bread is worthy of a mention alone: cultured butter with Dorset cheese from Vermont and salt from Long Island was nicely done and spread on pastry that was almost a mix between croissant and brioche – a delicate and gorgeous touch.

Next I was invited in to the kitchen for a delightful interlude of a lolly – this was a strawberry syrup and puree base accompanied by their house made vanilla ice cream rolled in lemon snow – a very nice treat.  After this pleasant interlude of the strawberry popsicle, the next dish back at the table was foie gras with marinated egg plant (aubergine for UK readers) and mint.  The savoury from the egg plant and sweet gel with a hint of mint were pleasant but perhaps the tang being a little dominated by the savoury – there was just too little of the sweet to make much impact I felt.  However, a friendly little number all the same.

Butter-poached and charred lobster came with greens and bean ecrasse (crushed).  The lobster was plump and had an aniseed-like glaze with fabulous clarity and viscosity without taking away the lobster’s flavour too much.  But if that was smoking barrel of sauces, then the onion and blueberry jus for the duck was the atomic bomb of reductions.  This was an incredible glaze which I have no problem saying was good enough to drink straight from the flask afterwards for what remained and this complimented a wonderfully cooked duck with perfectly appropriate honey and lavender glaze on top with a delicate cheese and onion tart with blueberries on the side (another long-standing dish).  It’s moments like this that make it all utterly clear…

Dessert was a blackberry ice cream and granita with caramelised milk and lemon spheres which was another complete pleasure and sealed the verdict of a very good meal overall.  Finally came a petit four and shot. Whilst grappas and in this case home made apple brandy from the restaurant is not my ideal choice as a digestif, it was a nice touch to have offered as its own and with a chocolate pretzel done as well as a chocolate pretzel seemingly can be.  The real star at the end though for me was the take away present of home made toasted granola (in a quality logo’d glass jar and going away present bag) to have for breakfast the next morning.  I am no problem saying this was 100% the best granola I have ever had in my life and I tried to minimise the amount taken each morning to maximise its life in the kitchen – sadly, that wasn’t going to be very long obviously.

This was a quality experience for all the reasons outlined at the beginning and for some hit moments.  The meal itself was skilful and I did not leave bloated, save for a bit of discipline in only having a few bites of the snacks at the beginning to leave space as the only thing to be aware of or order for two perhaps.  I thought the service was impeccable here and once again, in spite of hearing numerous things about Eleven Madison Park before going (good and bad), the version I had was an entertaining and fun time which created a pretty happy smile all said and done.  I’m not sure what the sceptics are on about here – I would come back in a heart beat to Eleven Madison Park and would be happy to splash a lot more next time in a blow out context with others, now that I know the lay of the land here.  It appears to me that a quality time will be had by all. 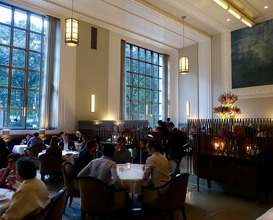 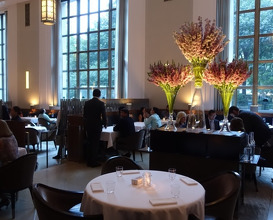 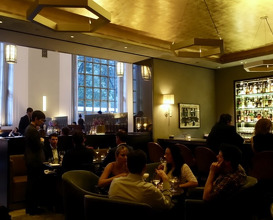 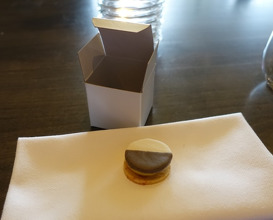 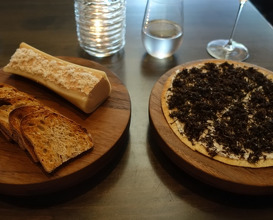 Foie gras with toast and black truffle on cheese tart 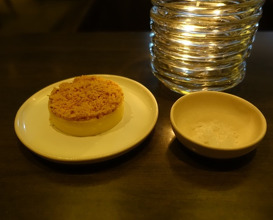 Butter with cheese and table salt 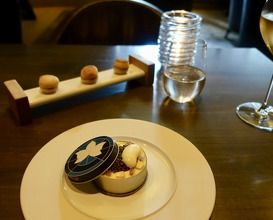 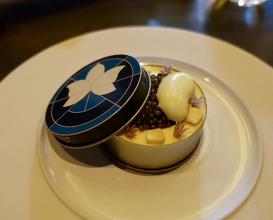 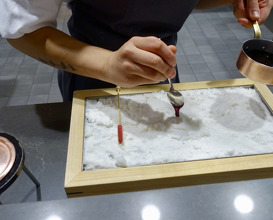 Kitchen visit for Strawberry popsicle being made 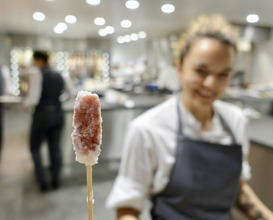 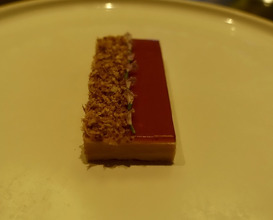 Foie gras with eggplant and mint 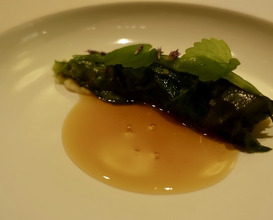 Lobster with greens and beans 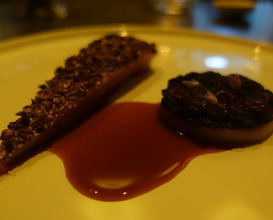 Duck with cheese and blueberry tart 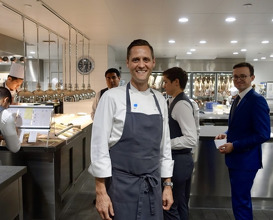 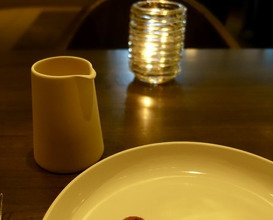 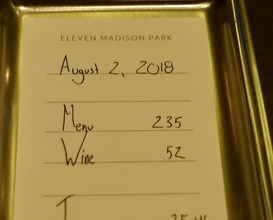 The dinner bill for one