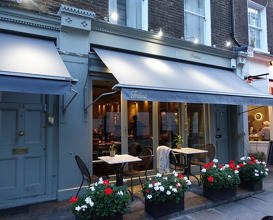 Tucked away within Marylebone village, an undeniably lovely part of London, is Trishna, one of a handful of Michelin starred Indian restaurants in the UK (they are all currently in London according to the 2017 guide).  The trump card with this option are the very reasonable set menus extending to not only lunch but also pre-theatre and the early evening.  The dishes reflect South and South Western Indian cooking (and are therefore a little more spicy than those from Eastern and Northern India).  The venue is small and cosy and candle lit in the evening with charming service.  Unfortunately attention to detail in the preparation one dish in particular for this visit reduced the impact of the food, but this was dealt with well by the management.  As usual, the score is for the food alone, hence the reduced grade on this visit.

The popadoms came in a variety of roasted (hard), shallow fried (beautifully soft) and in an unusual form more akin to crackers which were light and very good.  The sweet mango chutney and brown tomato chutneys were of course made on site and I found the sweet mango chutney certainly living up to its name as was almost jam-like, but it’s hard not to enjoy hand made popadoms with hand made mango chutney before an Indian meal, irrespective of the different takes on them.

The popadoms came in a variety of roasted (hard), shallow fried (beautifully soft) and in an unusual form more akin to crackers which were light and very good.  The sweet mango chutney and brown tomato chutneys were of course made on site and I found the sweet mango chutney certainly living up to its name as was almost jam-like, but it’s hard not to enjoy hand made popadoms with hand made mango chutney before an Indian meal, irrespective of the different takes on them.

Opting for the set evening menu, my starter of Ajwaini Salmon Tikka I thought was a delightful starter.  The spices were an interesting mix of carom seed and dill, the salmon itself with juicy texture and the soothing side of the yoghurt on the side.  Uncomplicated and satisfying.  One thing that was absolutely note-worthy was the wonderfully judged naan bread (perfect softness and flavour) and I would say more of these with a slightly less3 viscous version of their sweet mango chutney would be reason enough to request a table for that alone, a few drinks and then settle up.

The Nilgiri chicken kurma (kurma is slightly more heated than a korma) came with boneless chicken thighs, coriander, curry leaf and coconut.  For the price of the £28 for the three courses, the main was not only the kurma but came with basmati rice (nice and fluffy), spiced new potatoes (average flavour) and dahl which is puts the value for money even further ahead than it already is compared to other Michelin starred set menus.  However, my excitement at having a chicken thigh kurma (the best part of chicken meat with one of the best curry flavours) was stifled on the discovery of part of an elastic band in the food.  The chicken itself was definitely under cooked as parts of red were exposed even if the rest of the dish could be eaten.  After asking for things to be confirmed, the management came to ask where the ‘foreign object’ was discovered so that all other parts could be checked, gave sincere apologies and offered a glass of something to make up.  As pleasant a gesture as this is I couldn’t actually eat the rest of the dish as I was put off from the rest of it so I had to refrain from eating the main any further.

Finally, the fig and cardamom kheer (cardamom, pistachio, fig khulfi) was clearly a set menu offering and as creamy as the rice pudding-like kheer was, the fig kulfi ice cream in the centre was almost like ice and I just didn’t find that the combination of cold rice pudding and cardamom worked for me at all, with or without the crunch of the pistachio pieces on top.  Petit fours came in the form of orange jelly with a hint of chilli and an Indian shortcake which, unfortunately were not the best as well; the jelly was very tough and the shortcake had a nice texture but ultimately a bit flat.

So, overall the meal represented very good value for money, although in hindsight I would have preferred the price of the kurma to be removed as I did not want to eat the rest of it on discovery of the foreign object rather than a courtesy drink, but the management dealt with it in an entirely graceful manner.  Charm and hospitality can cover most sins, but ultimately, for a Michelin starred venue, this was a disappointing meal. 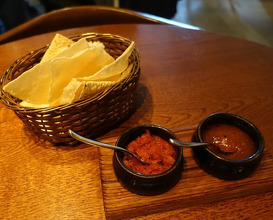 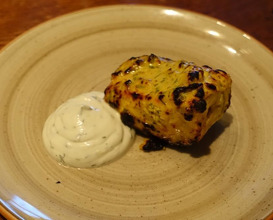 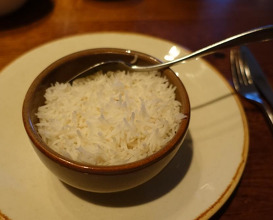 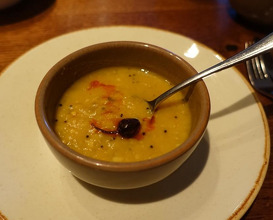 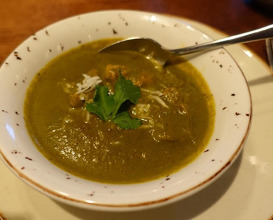 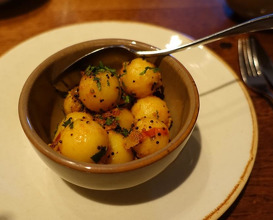 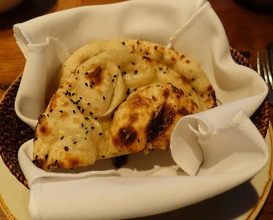 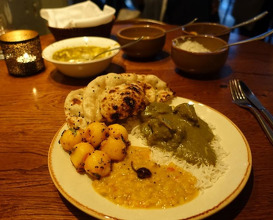 All together now main 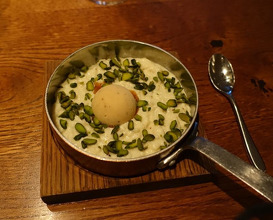 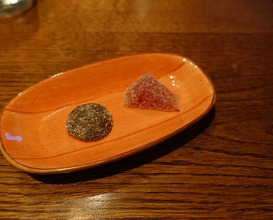 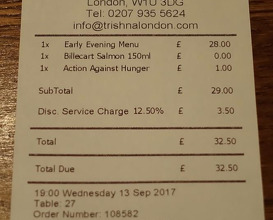 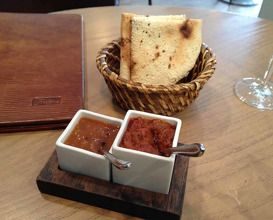 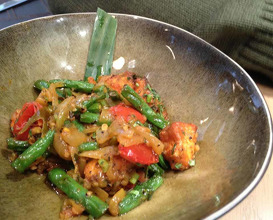 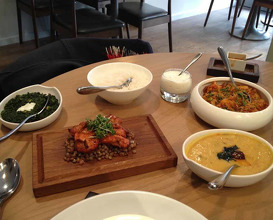 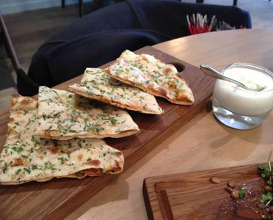 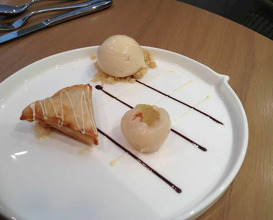 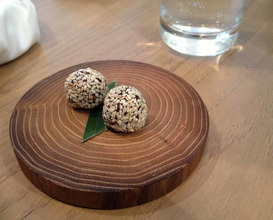