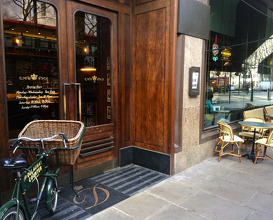 Meal at The Delaunay

One would think on entering The Delaunay that it is the sort of establishment that has been there for decades, however it has only been there for just under 4 years.  The sister restaurant to The Wolseley and part of the Corbin & King Gp, it achieves a European café buzzing atmosphere.  It has a lovely, traditional bistro design and feel about it and the green leathers, marble and wooden décor has a pleasant style and avoids being over the top as well which is a very nice aspect.  The staff were accommodating to allow our late breakfast table spill in to lunch where all other tables had been transformed to the more formal look of white table clothes placed on for the afternoon service around us at 1130am.  Overall, the food was mildly disappointing.

The food was, on the whole ok and the service mixed but I would prepare yourselves for some cheeky charges – the 2 x cover charges were applied again (seemingly for the table cloths) and the side of bearnaise sauce was provided…for an additional £7.50.  I would therefore not put this venue in the reasonable or value of money  category, but it was a pleasant place to visit with some good moments.

The food was, on the whole ok and the service mixed but I would prepare yourselves for some cheeky charges – the 2 x cover charges were applied again (seemingly for the table cloths) and the side of bearnaise sauce was provided…for an additional £7.50.  I would therefore not put this venue in the reasonable or value of money  category, but it was a pleasant place to visit with some good moments.

Foodwise, the dishes were on the comfort food level and certainly no complaints, but some mixed emotions.  The banana smoothie was creamy and luxurious, the carrot and ginger juice was beautiful with just the right level of kick from the ginger at the end.  The portion size of the schnitzel (which was from a choice of 4 kinds so schnitzel lovers note this lunchtime menu!) was very generous although for the perfect kind of veal schnitzel, frankly one would need to fly to Dusseldorf and dine at Bistro im Victorian.

The egg benedict was absolutely fine and I actually thought the Welsh Rarebit was far better here than at their elder sibling’s version at The Wolseley – Delaunay’s had a superior cheese flavour to the topping and on bread whose crusts were not extremely rigid. However, I was disappointed with the New York hot dog – for such a classic piece of comfort food, and served in this sort of establishment, I would have at least expected a better effort on the relish, onions or something other than just a tiny side of mustard.  A poor show on this I thought unfortunately, but the steak tartare lifted my emotions owing to its perfect seasoning with quail egg.  I have seen more adventurous presentations of the steak taratre, such as in Brasserie Chavot and Berner’s Tavern, however it really did taste good here.

Once again a cover charge of £2 per person was applied as part of the Corbin & King Gp; for a full explanation of this charge, see my review of The Wolseley.  Going by this explanation, it was surprising to see that they had applied it to today’s bill as we were already seated in the ‘full table service’ area and as a result of having breakfast, we were not given a table cloth for lunch.  Presumably this was because the staff did not wish to disturb the table, but it would therefore seem that the explanation of the cover charge does not apply to The Delaunay or they are inconsistent between the two.  If it is for the table cloths, it would have been nice to have one before being charged… Once again we are talking about a minor addition, but the issue is of inconsistency, a lack of clarity and potential, complacent over-charging.

Overall, it was a pleasant venue, with simple, all day dining foods done to a comfortable level with service that was eventually warm, but I would also say with service that needed tightening (served an additional smoothie and hot dog dish when both were not asked for) and was a little mixed overall.  However, a nice option to have if in the area and in need of an alluring venue. 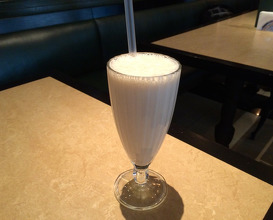 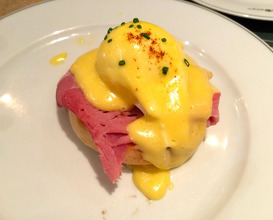 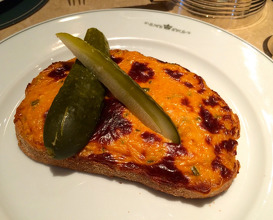 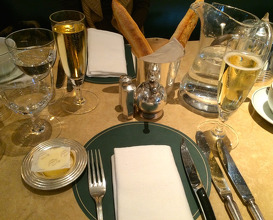 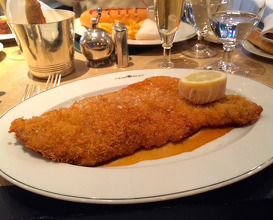 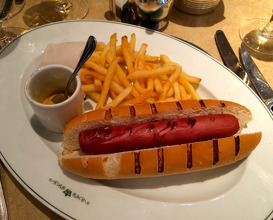 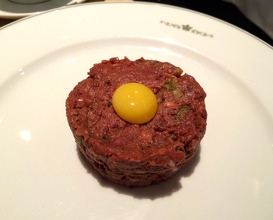 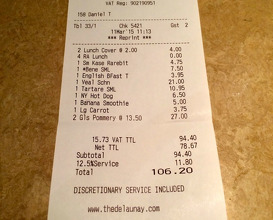 The bill for two at breakfast / lunch