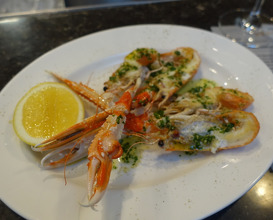 Sabor is the solo venture of Nieves Barragan Mohacho who was formerly of Barrafina which also had a Michelin star under her lead.  Sabor (meaning flavour in Spanish) represents food from the south, north and north-west of Spain and can easily be dropped in for tapas style dishes.  I have a lot of affection for Spanish cuisine, in fact it is one of my favourites, as is the magic of San Sebastian, but sadly my experience here was that it didn’t produce levels of happiness anywhere near those had when actually in Spain.  A couple of elements were pleasing, but the hype of this opening did not feel to be supported by the produce.

Clearly the meal needed to begin with the croquettes (or croquetas in Spanish) which were two kinds: prawn and piquillo pepper.  Both were pleasant as fried bechemel in breadcrumbs always is, but fairly ordinary at the same time.  The price tag of £6 is quite hefty considering, so I am reliably informed, that ingredients wise, these cost a matter of pence to make, depending on the filling.

Clearly the meal needed to begin with the croquettes (or croquetas in Spanish) which were two kinds: prawn and piquillo pepper.  Both were pleasant as fried bechemel in breadcrumbs always is, but fairly ordinary at the same time.  The price tag of £6 is quite hefty considering, so I am reliably informed, that ingredients wise, these cost a matter of pence to make, depending on the filling.

One of the things I was most looking forward to was the goat’s cheese and truffle pieces of toast and whilst this may have pleased most diners for its elegant look I was actually startled by how bland this was.  There was almost a non-existent level of truffle aroma from the gratings provided (truffle is mainly used for the aroma rather than the actual flavour of chewing into it) and the goat’s cheese was very flat in itself as well.  Sorry to say that this was a huge disappointment.

Iberica ham came from Cinco Jotas and was the top grade of Iberica ham one can have whereby the pigs are fed acorns and allowed to roam in free environments and gorge as opposed to being kept in cages on a conveyer belt of wheat and grain.  Salmonette (actually red mullet) came with rice whose main forte was the sauce or stock that it was served with and the pig’s trotters were an indulgent fried snack but both were agreed they were far too peppery.  Langoustines were treated with respect and just a drizzle of citrus but I have had significantly better quality specimens in my time (one example is at a nearby Japanese restaurant in Mayfair called Umu).

The oxtail was cooked well with a deep enough sauce but was overall a bit heavy on the starch with such a large amount of mash.  For a more refined quantity example, you can always look at the quail and truffled mash dish at L’Atelier de Joel Robuchon).  Unusually, it was the dessert that was probably the most pleasing dish with excellent pastry and rhubarb that was toned down in acidity and actually pleasing to have in itself.  This was joined by honey and saffron ice cream which was an original ice cream flavour for me and worked well.

Overall, this was a very mixed series of dishes that and whilst it was good to be at the counter with so many chefs in front of you, the space to get around people at the bar to your seat or if you need to go to the loo is actually ridiculous.  I do not need to be carted around by four chair-bearers, but it is such a squeeze at the side of the counter that you are literally pressing shoulders with the diners to your left and right – communal and may even be what some people like, but discomfort whilst eating? Nah, sorry, not a fan.  I may pop into Sabor again in a year or two to see if anything has changed, but something tells me this may be wishful thinking. 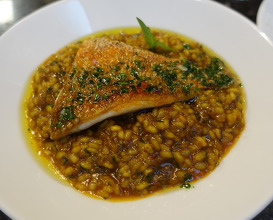 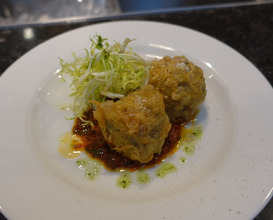 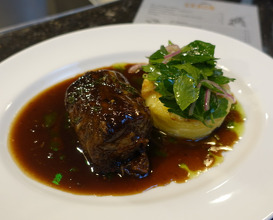 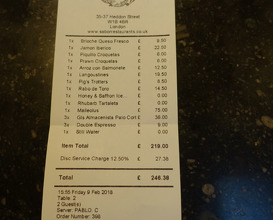 The lunch bill for 2 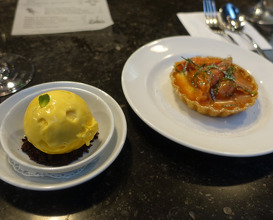 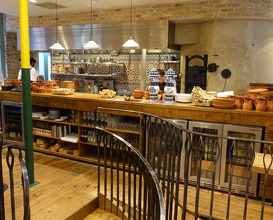