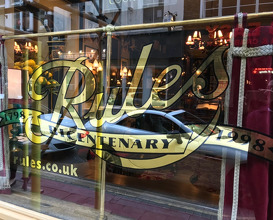 Rules prides itself on being the oldest restaurant in London with its 1798 birthdate and sits a few minutes walk away from Covent Garden.  Wiltons (a traditional seafood restaurant in Jermyn Street), who boast dating back to 1738 would obviously contest these Grandfather rights.  Either way, Rules is steeped in heritage with a beautiful interior to match and is ideal for romantic occasions and Sunday lunches bearing in mind its clear, traditional cuisine.

The forte of this restaurant is the fact that you can say you have been to Rules rather than revelled in the food as I found my meal here very simple and with some surprising lack of seasoning and charm from the service at times.  The a la carte menu only means it keeps within firm tradition, but also does not permit a below-average priced lunch as a result – this, with a glass of reasonable wine will unlikely be lower than £60 per person.  Perhaps try here for a special or romantic occasion in the evening as the food prices are the same throughout the day so you may as well opt for the evening and hopefully your experience will be better than the somewhat busy, tourist conveyer belt one I witnessed.

Unfortunately I have a few micro observations on this meal: a) bread was not brought out until my starter had arrived, b) there was some slightly estranged service with a waitress tapping a pencil on the menu firmly at one point to say “if you don’t go for that one it’s your loss” and c) it was basically like a sauna inside.  Nevermind, on to the menu and what did that have in store for a Sunday lunch?

A simple rabbit terrine for the starter held some good meat and jelly, but the actual flavour did not have much impact – thank God for the piccalilli was the overriding thought to provide the sharp interest it needed.  Seeing and hearing some of the staff having a minor argumentative episode took away the charm of the place for all its heritage – it’s not the end of the world, but I’m of the opinion that diners do not want to be caught up in an episode of reality TV and are paying for as serene an experience as possible in places like this, therefore this was also a bit of a surprise for me to see.  Nevermind, on to the main…

The pheasant was a pleasure to see on the menu and how exceedingly appropriate.  The breast turned out to be fine with a deep jus made with all of the bird’s juices, but I did find the mash a little under seasoned and to my heartbreak, similarly so with what I was so looking forward to – the bread sauce(!).  The latter simply had no real spice (usually nutmeg but under these circumstances, anything would have been better than hardly anything), but ultimately, this was a roast dinner I think most would be pleased with.  Solace came in the form of a very good bread and butter pudding.  Whilst the underside of this were more akin to cooked egg, it held custard underneath that had the temperature of lava which was thankfully cooled with a very well flavoured custard for the very nicely grilled bread on top.  This was a pleasure to have.

Lunch all in for one was just over £62 which, for the meal I would say was as fair as the Chardonnay that came with it.  It was more of a testament to where I was I think and there certainly was a pleasant buzz around the restaurant for those that were there any having a good time and pleased to be there.  I had forgotten how splendid it actually is, particularly the bars upstairs and is definitely a lovely interior to behold; I would simply go here with friends that wish to be here for a classic British menu in delightful surroundings as its trump card. 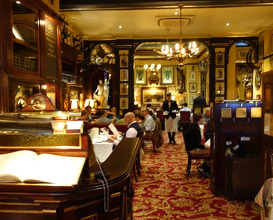 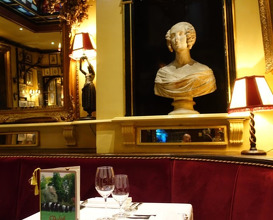 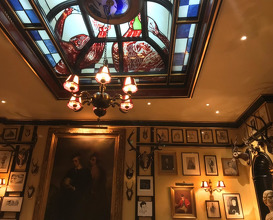 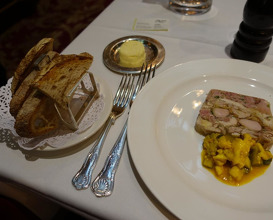 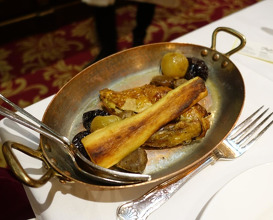 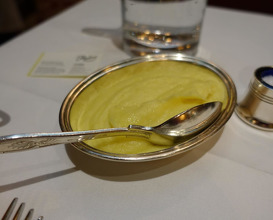 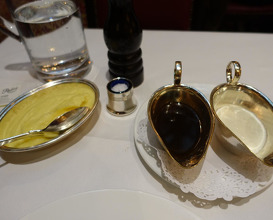 Side of mash with pheasant jus and bread sauce 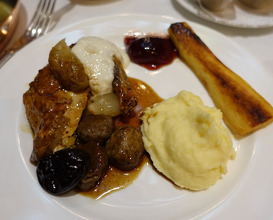 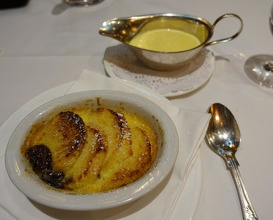 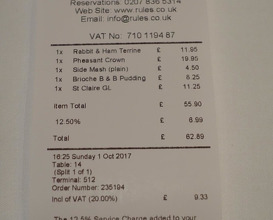 The Sunday lunch bill for 1 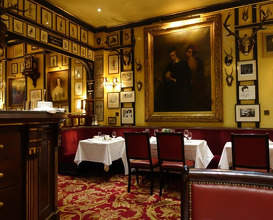 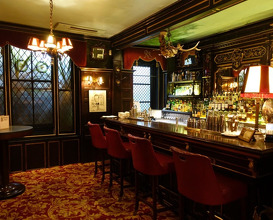 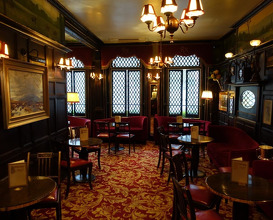 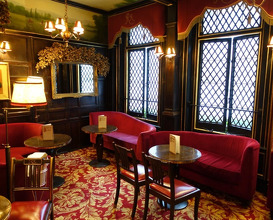