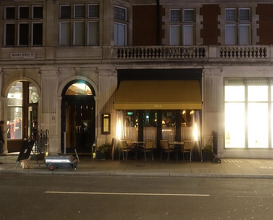 Jamavar is London’s newest Indian restaurant to have received a Michelin star and did so in the 2018 guide.  Headed by Executive chef Rohit Ghai, this is the first Jamavar to exist outside of India, although the Exec chef has formerly served as head chef within three other Michelin starred Indian kitchens in London underneath their Executive chefs (Gymkhana, Trishna and Benares).  This may help to explain why the style of cooking was quite similar in Jamavar.  Although similar, I found the cuisine a slight notch up from those mentioned and generally at the upper bracket of Michelin starred Indian restaurants (all of which  are in London and I have visited).  Perhaps I was affected by the hype a little, but ultimately, there were moments of sparkles as opposed to the whole ensemble exuding wow moments.  It is certainly worth a visit if you enjoy food spanning North and South regions of India.  Vegetarians will be customarily well catered for here and the lunch / pre-theatre menus are particularly good value with £32 for 4 courses being the highest value for money option.

The restaurant has two main dining areas – one on the ground floor as you enter and the other downstairs on the basement level, the latter being a touch more cosy and dimly-light.  The tasting menus at the time of visit were £70 for the meat and £65 for the vegetarian options and as mentioned, the real bargains are at lunch or pre-theatre.  I’ve noticed that virtually all of the Indian Michelin starred restaurants seem to have this format which is a very useful option.

The restaurant has two main dining areas – one on the ground floor as you enter and the other downstairs on the basement level, the latter being a touch more cosy and dimly-light.  The tasting menus at the time of visit were £70 for the meat and £65 for the vegetarian options and as mentioned, the real bargains are at lunch or pre-theatre.  I’ve noticed that virtually all of the Indian Michelin starred restaurants seem to have this format which is a very useful option.

In terms of the meat dishes, my feast began with the tellicherry pepper and garlic soft shell crab with damson chutney and garlic chips which was satisfying as the trick here is to hide the fact the fact that the soft shell crab has a pint of oil still probably lurking within it from the deep fat fry and this did not feel like that.  The hint of garlic was also a nice touch.  The malai stone bass tikka with mace, green cardamom and avocado chutney was simple and of good quality however, the tulsi chicken tikka with sweet basil, pickled radish and raita was slightly better, based on the very succulent meat with supporting tikka and soothing raita.

The Adraki lamb chops with royal cumin, crushed onion, fennel and ginger were fine – no explosions, just good lamb with good spices.  However, the normality ceased when the old Delhi butter chicken came.  This particular chicken is corn-fed, from Suffolk and was char-grilled and pulled with fresh tomato and fenugreek.  The richness and creaminess of this butter chicken cannot be emphasised enough and I knew before even choosing any other dish on the menu that I was going to have this – and by the Power of Greyskull, I’m very glad I did!  It’s a very hard battle, the butter chicken at Jamavar versus the butter chicken at Darbaar, but on balance, I think Jamavar pips it to the post for this dish.  Following this, the chilli chikki lava chocolate fondant with cinnamon kulfi and caramelised pecans was another clear success and everyone at the table was united in this being a cracking dessert in any restaurant – interesting, sumptuous and balanced very well by the cinnamon kulfi which was A-grade.

Regrettably I didn’t manage to taste all of the vegetarian options but where I did I can comment.  These dishes started with a fair, potato tikka, honey yoghurt, white radish and tamarind mint chutney, and an enjoyable podi idli (savoury mini cakes) with curry leaf, black pepper and aubergine sambhar (lentil based gravy).  I was actually quite jealous of the dal chawl aur achaar (crispy lentil and rice dumplings), served with green chutney and heritage carrot pickle as this was very appealing as was the kasundi paneer tikka with mint and raw papaya chutney.

The vegetarian main was aubergine Chettinad (mixed spices) with stuffed baby eggplant, stone fungus and pakora (fried mini-balls of rice and chickpea in batter).  This I did try and there was a very pleasant and deep flavour to the spiced aubergine which was very good.  The supporting sides that came with both mains were dunghar dal (a spicier dahl made from yellow lentils as opposed to earthier beans) which was considerably heated by the chilli and the gobhi aloo (potato with cauliflower).  Both were reasonable enough, but the dahl was unnecessarily hot for everyone at the table and took the pleasure away from having it.  However, both mains were the prized moments of the meal.  Dessert on the vegetarian side came in the form of rhubarb falooda (made from mixing rose syrup, vermicelli, sweet basil seeds, and pieces of jelly with milk), with saffron and rabri (milk) kulfi.  Whilst there was nothing particularly bad about the latter, it was also nothing to sing about at the same time.

The drinks menu was another £50 per head for those that went for it, which is reasonable enough, but as ever, when dining in larger numbers, just as the menu tally tops up, so too does the overall service charge naturally.  Service was extremely hospitable throughout the meal albeit a bit uncertain at times and the environment was perfectly pleasurable.  I look back on the meal, probably guilty of having raised expectations based on its award and anecdotal applaud, but I can say comfortably that the dishes were good quality and presented well.  Sparks of happiness were caused during this meal as opposed to ‘lift off’ feelings, but equally, I’m pleased to have gone and it is a very good option to have, particularly for value for money meals prior to the theatre or at lunch in particular.  I believe healthy plus points would be gained here for a romantic occasion as well. 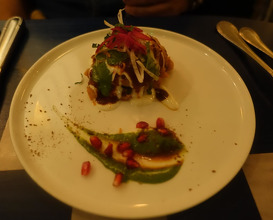 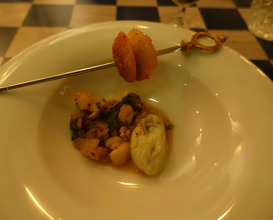 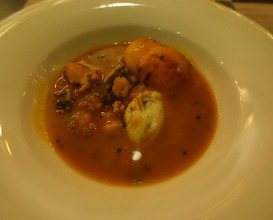 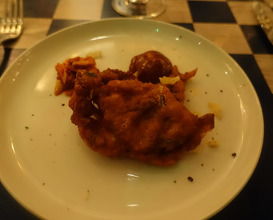 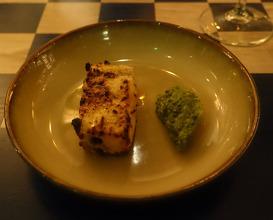 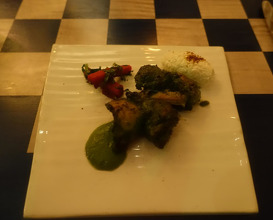 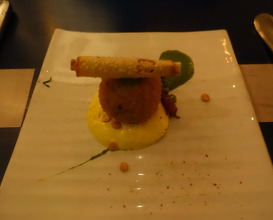 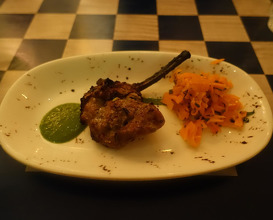 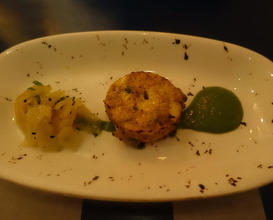 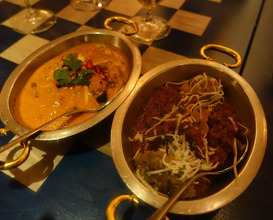 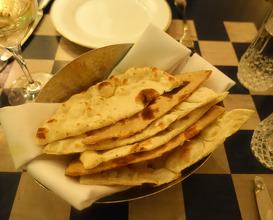 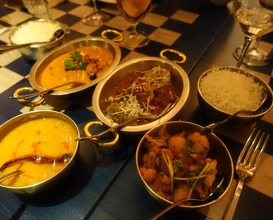 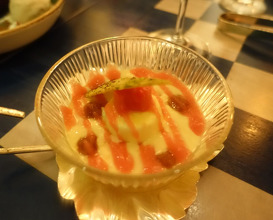 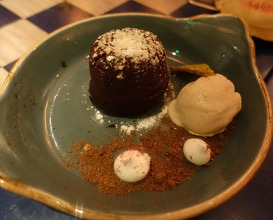 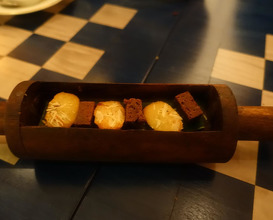 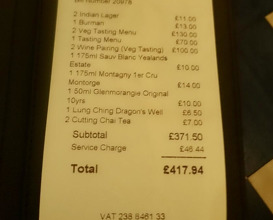 Dinner bill for 3 with drinks