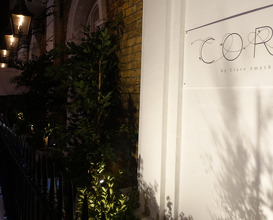 Core opened in 2018 and is a rare entry into the 2019 Michelin guide as it went straight in at 2 stars and at the first available time it could appear.  It is a beautifully designed restaurant, slick, with good acoustics and enough space for each table and more crucially, with very pleasant food.  A brief idea on price, the cheapest menu (a la carte) was £85 for three courses, so this is not a cheap outing.  It was not the strongest 2 Michelin star restaurant I have come across in the UK for the food alone, but it is one of the swishest places in general.  Book early as the waiting lists here extend to months for even weekday slots.  A lovely addition to London and Notting Hill in general and is going to provide polish to many Birthday or romantic celebrations I am sure.

This was a much-anticipated visit and when this restaurant received its 2 Michelin stars (along with Moor Hall), there was almost hysteria to get a table.  As you may know, Clare Smyth was the chef Patron of 3 Michelin starred Restaurant Gordon Ramsay for many years and this is her first solo adventure.  It would appear she is ready or has been for quite a while and has Jonny Bond as her head chef whom she has personally recruited.

This was a much-anticipated visit and when this restaurant received its 2 Michelin stars (along with Moor Hall), there was almost hysteria to get a table.  As you may know, Clare Smyth was the chef Patron of 3 Michelin starred Restaurant Gordon Ramsay for many years and this is her first solo adventure.  It would appear she is ready or has been for quite a while and has Jonny Bond as her head chef whom she has personally recruited.

A bookshelf with many Michelin guides is nestled in one of the corners of the restaurant where I happen to be placed and made for interesting reading.  The meal began with snacks placed on instagramably alluring decorative pieces, including a nori seaweed tart with parsley jelly and eel which was pleasant and subtle; smoked duck wing with orange & coriander spices (beautifully done) and foie gras with Madeira chilli which was a delight and whilst not much kick from chilli, was well done.  A cheese gougère was fluffy and pleasant with soft liquid cheese inside.  This was a strong start down to the rather wonderful Bordeaux butter and breads using flour from a 5th generation Wessex mill, one of the last mills to produce flour in the country.

A Charlotte potato in dolce seaweed with trout & herring roe, with fermented potato chips, was the first course on my £85 /3-course a la carte choice.  This was a humble potato but was seasoned beautifully with the roe, good crunch from the crisps and with a buerre blanc sauce that was utter beauty as a sauce.  I’m aware the whole point of this dish was to celebrate the potato, but I simply, I found it too starchy as a dish and thought it would have been better to have the ratio of potato toned down a fraction with a bit of the inside scooped out and replaced with more of the wonderful topping.  However, still worthy of a Royal banquet.

The next course was duck leg with honey and thyme with duck ragout tart and very thin slices of red grapes which were a skilful decoration but also great balance to the richness of the fabulous Madeira and duck reduction that it came with.  But it was the gorgeously smooth duck meat with well-rendered fat, providing a very nice sweet and salt finish combined with the Timut pepper for the additional kick; Timut is a pepper from Nepal which has a grapefruit finish and is far fresher and less nasily than most would be used to of regular shake-on pepper.

The ragout is worth a mention on its own as it actually had an astonishingly think pastry case with good flavour.  The ragout had heart, gizzards and confit leg meat inside with slices of grapes that are brushed with confit fat and thyme as well as parmesan cheese inside pastry to make it easier to hold.  A lot of attention to detail in this dish and I could feel it from start to finish.

The Core Apple is a staple at the restaurant with caramelised apple and vanilla mousse with Somerset apple brandy.  This was delightfully light, skilful and pleasant.  It had just the right amount of creaminess and you know when you are in serious hands when something like this is your pre-dessert.  The main dessert was a pear and lemon verbena meringue. This is undeniably well designed.  The pear sorbet sits inside an extremely delicate verbena meringue, with verbena cream and pear gel – light and well balanced.  There were lovely textures and the flavours combined were simply a marriage.  The superlative meringue was the champion here with excellent supporting elements.   Finally, the petit fours included a decent Sauternes jelly and chocolate tart which was freshly cooked and runny in the centre; a good finish.

Service throughout was very slick and I was in the hands of an excellent sommelier, advising and a pleasure to talk with throughout the dinner.  His choice of a glass of 2014 Montrachet and very good Pinot Noir from Australia made the proceedings all the better. Unfortunately, there was one episode of snootiness when one of the waiters decided to answer back at me on one occasion which actually marred the experience a little, but other than that, it was a professional act.

This is a smart restaurant and aside from the slight cockiness from one waiter on one incident, it was a refined but also down to earth atmosphere.  You are certainly paying for this and if you were to put the foot down, you could easily leave here minus £200 per person for the full tasting options.  However, I was pleased with the overall results and is a place I see myself going back to do properly. 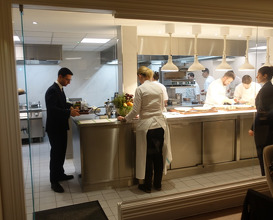 Clare Smyth at the pass 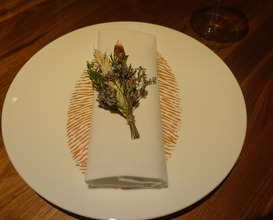 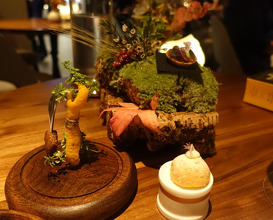 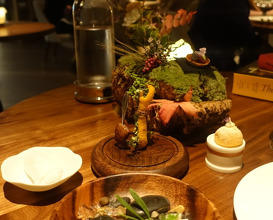 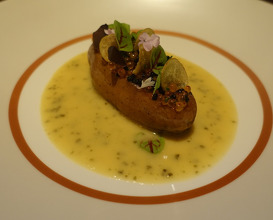 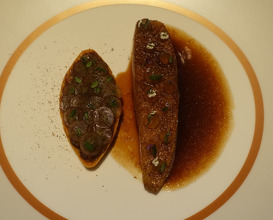 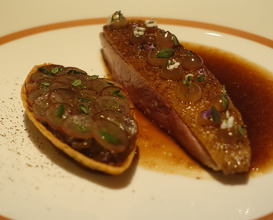 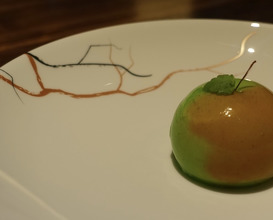 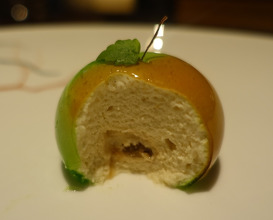 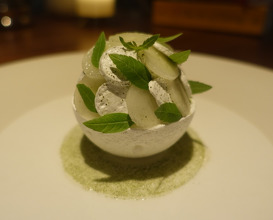 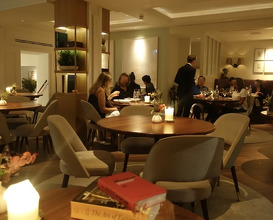 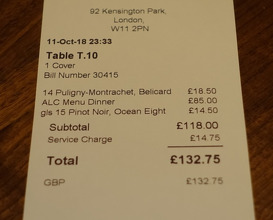 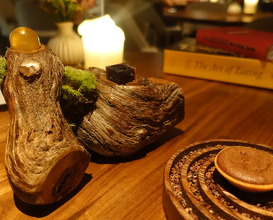