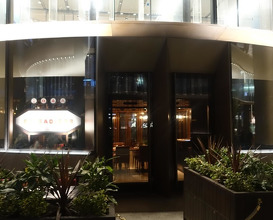 Another restaurant that has come from the big-hitting JKS restaurant group who own Michelin starred Trishna and Gymkhana plus the Sri Lankan and Michelin Bib GourmandHoppers.  Brigadiers opened in June 2018 to wide interest.  A tad disappointingly, I did not feel as many waves of love for the food as other pundits have been hailing for Brigadiers based on the dishes I had and certainly not in comparison to the likes of say Michelin starred Amaya and Jamavar.  Not all doom and gloom as there one or two pleasant offerings and the interior is as Corporation of London as you find with 7 different dining rooms, three of which I saw with their own TVs (although you have to be sat in a good place to actually see properly in the majority of cases) and instead of a traditional waiting area, there is a high rise stool bar area with a pool table and dart board to wait for your table.  It is definitely well done in design, but I simply felt the £95 price tag for the snacks and beers we had was driven by the area and not by the quality of the food.

Brigadiers is named after the head chef’s Grandad, who was actually a Brigadier in the Indian Army.  This was very pleasant to see as indeed as was my Grandfather a Brigadier in the (British) Army.  Generations on, now his Grandson is head chef with his own cooking Brigade and has devised a menu that is split in to three main parts: street food, barbecue, buns and mains.  These all start from a very reasonable end but can go up in to the £30s for the mains.

Brigadiers is named after the head chef’s Grandad, who was actually a Brigadier in the Indian Army.  This was very pleasant to see as indeed as was my Grandfather a Brigadier in the (British) Army.  Generations on, now his Grandson is head chef with his own cooking Brigade and has devised a menu that is split in to three main parts: street food, barbecue, buns and mains.  These all start from a very reasonable end but can go up in to the £30s for the mains.

The restaurant is a complex of different dining areas and rooms.  There is a main dining room holding approximately 40 covers, a main bar and dining area for roughly 25 and five other smaller rooms for parties anywhere between 6 and 20 people.  Therefore, this is obviously been well thought out for the streams of business functions and parties that I saw when on my visit, most of whom having come straight from work in the surrounding city area, still in their suits and work clobber.  A definite atmosphere in general, from raucous (almost private) rooms to a slightly more subdued main bar area to a stand up pub-like bar area complete with pool table.

Our meal started with a selection of popadoms with different chutneys: tomato and onion seed cheese, mint and pineapple which were good to have albeit harder than most (less the rice cracker).  Nibbles started  cheese and onion bhajis which, as you can expect were quite cheesy.  I have always loved onion bhajis and these were well done with a balsamic and mint dip but in hindsight I think simple, plain onion bhajis work better.

Pork scratchings with chaat and cod roe were interesting, dusted with paprika and whilst being the perfect and upgraded pub asset to any beer, owing to how stodgy these were, there was only so many you could do before truly wanting to try something else.   The Sapper’s egg is a reference to Colonial days in homage to the military personnel who favoured this dish (Sapper is the nick name for Engineer soldiers) and was a very pleasant little dish.  Essentially a soft boiled egg inside a light and spiced naan – probably the dish of the meal.

Then for the main bit we favoured keeping it causal with a wagyu Seekh kebab Anda kati roll and Tawa lobster masala lobster & shrimp kati (a form of heated roll) from the ‘bun’ side of the menu and these seemed reasonably priced at £15 and £12.50 respectively – filling and certainly not £39 for the masala beef rib eye steak with Sapper’s egg.  Hard to see how much lobster in comparison to shrimp was in the former (my guess on looking was not that much) and the rolls were basically harmless but needed a good amount of condiment being as generally dry as they were for the mouth.  The house dahl was nicely spiced but a little watery for my preference.

The meals ended with Kulfis – chocolate with coconut and banana.  Both of these were fine (the coconut having the edge on the other two) but it was at this point that feelings sank a little as the desserts seemed as though they were at the level of a regular chained restaurant or service station with some added decoration for the banana.  There are times when dining when you know a place has just dropped a peg or two in your mind…and at the conclusion of this meal, this was that moment for me.

Brigadiers is certainly an entertaining place and the staff quite well drilled as it happened so no complaints of any kind there – it does what it was probably designed for very well: giving an upmarket curry occasion for city slickers in a plush environment but no more.  Recommended for boozy and group gatherings rather than finesse Indian food – for the latter, I would head to the previously mentioned Indian eateries or, for the absolute gold in Indian food in the UK at the moment, I would head to non-Michelin starred Indian Accent in Mayfair – there you will see a difference. 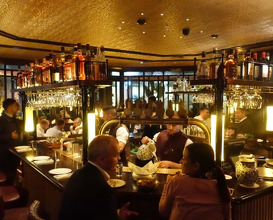 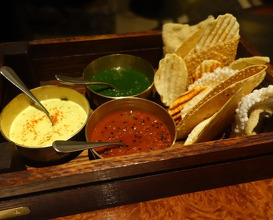 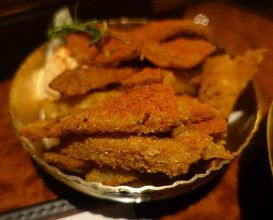 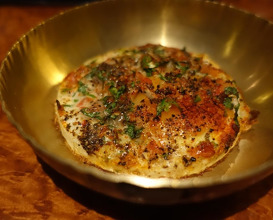 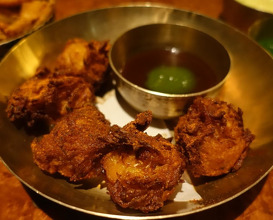 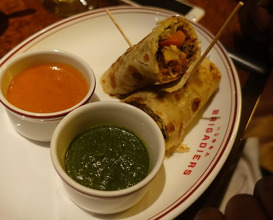 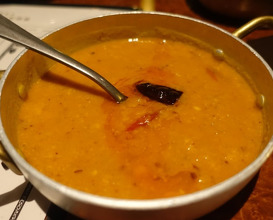 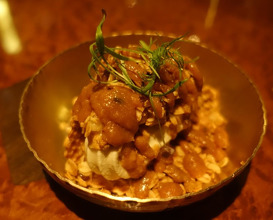 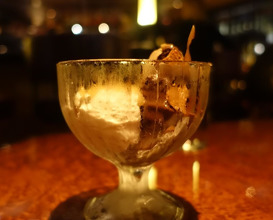 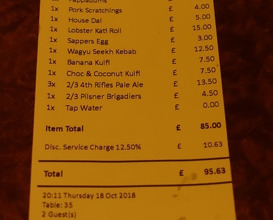 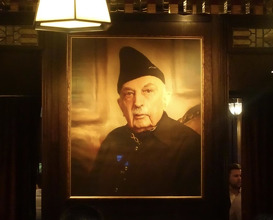