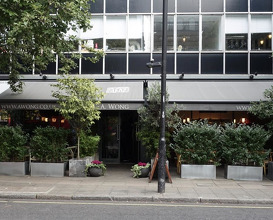 Meal at A Wong

I’ve got fond memories of Victoria, mainly owing to spending childhood school days in Ecclestone Square.  But it was a surprise to me that along a non-salubrious high street off Victoria station  sat this reportedly up market Chinese restaurant and one which had escaped my radar until it was recommended by a friend.  As you enter you can only think, “Of course it’s a great place” with its almost stylish cafe feel complete with snazzy counter bar to eat at, overlooking the kitchen.  Barely a few weeks after this visit and before the ink had dried at the press of the Michelin Guide 2018 publication, A Wong picked up its first star since opening 5 years ago.  And I find that rather fitting, as the quail egg croquettes, clever rabbit dumplings, pork with foie gras and custard buns were very much above the norm for Chinese cuisine.  A lovely terrace garden in front and the great service added to a superb meal that was £75 pp for the array of items and drinks making this a stand out venue for eating Asian food in London.  Highly recommended.

Right from the off, there was a casual feel to this restaurant, but combined with the fact that those serving were professional and knew their products and format.  The large, obligatory prawn crackers were light and spiced well to nibble on over a couple of Tsing Tao beers to begin with, but I began to realise what my associate, Mr Bainbridge was talking about when the prawn dumplings with citrus foam arrived.

Right from the off, there was a casual feel to this restaurant, but combined with the fact that those serving were professional and knew their products and format.  The large, obligatory prawn crackers were light and spiced well to nibble on over a couple of Tsing Tao beers to begin with, but I began to realise what my associate, Mr Bainbridge was talking about when the prawn dumplings with citrus foam arrived.

Steamed dumplings with a Shanghai soup vinaigrette and tapioca pearls  were soft and very well executed, not to mention lovely parcels to literally drink the insides through little incisions of the casing.  The wontons with prawns with garlic and bean curd sauce to dip in were equally pleasant, but the stakes were raised by the wonderful quail eggs encased with extremely light, almost flakey to the touch croquette exterior served with a lovely ginger oil and crispy seaweed sauce.  The latter here is why aromatic and Asian dining is so wonderful as it is significantly lower in calories than thick, cream or egg based sauces, but also packs a huge punch at the same time…which these did.  Frankly, I would go back for these alone.

I liked the way that the honey baked pork pasties had a tinge of caramelisation on the outside crust and the filling was good but it felt as if it was far too little for the quantity of pastry that encased it.  A sound flavour but perhaps more filling or less pastry would have raised this.  The deep fried prawn balls with chilli were another very doable course as were the char sui buns with venison – again, perhaps a slightly bigger filling to up the moisture compared to the surrounding walls of dried

Aromatic duck with ginger oil and home made plum sauce was very good.  Aromatic crispy duck is inherently more dry than Peking as the former is deep fried as opposed to oven-roasted and I find aromatic can easily become too horrendously dry as a result.  Not so in this case, the duck was as succulent as they come and whilst the sauces were good but not to the level of HKK (now sadly closed down), it was still very good with unbelievably light pancakes.  This was followed by the signature rabbit in carrot dumplings which was obviously a novel and clever way to present them, with a refreshingly different form of dumpling (ironically, I had to forage for the rabbit inside a little bit).

I was however, eternally grateful for being shown the char sui pork with caramelised sausages and frozen foie gras shavings.  Probably not the sort of dish to have every day from a calorific point of view, but was superb in flavour – the sweet, sticky sauce, with succulent pork and wonderful compliment of ‘light’ foie gras shavings that melted to the touch was a lovely mesh and did not last long on the plate.

The track record with Asian / Chinese restaurants is that the forté is not with desserts and that’s even at 3 Michelin starred level had thus far.  However, these custard buns were frankly mesmorising and one of the nicest desserts had this year full stop.  The idea was creative, but when the light and fluffy bun exterior ‘bled’ with wonderfully sweet and warm custard made from duck eggs (not too sickly sweet), this really was gorgeous and worked on every level, no question.  The white and milk, crunchy petit fours were also pretty good and a drink in the terrace afterwards with something different from the sommelier finished a meal that was basically one of the stand out meals had this year.  The price was great and this is one of my new, favourite ‘pinned’ places in my mind for Chinese food and I am already plotting when to go back for the full Peking duck menu which you need to book 48hrs in advance.

I would recommend this restaurant for a Dim Sum lunch for a breezy drop in at the counter just as much as I would an entire feast within the evening as the products (on first experience) are first class, as is the hospitality and overall experience.  I’m going back as soon as I have got a window in place after visiting the newly promoted restaurants of 2018 in the next few weeks.  A great place. 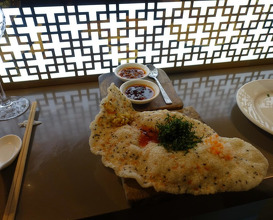 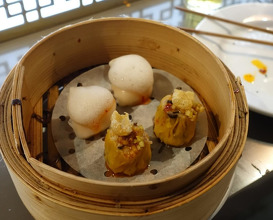 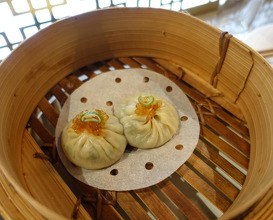 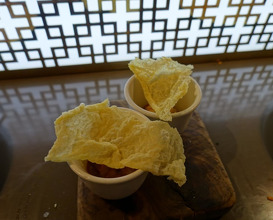 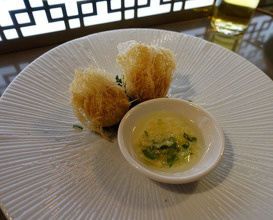 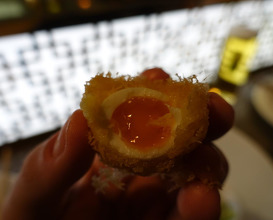 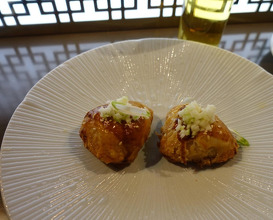 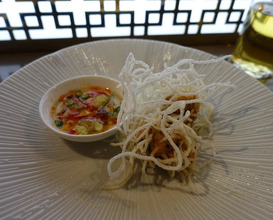 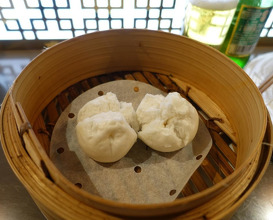 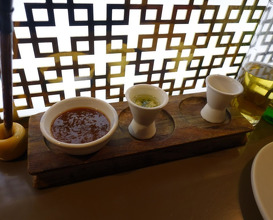 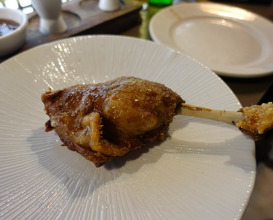 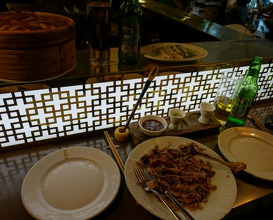 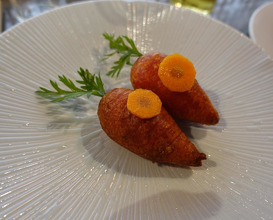 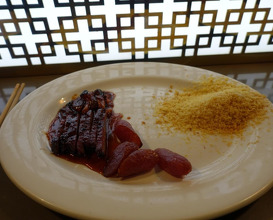 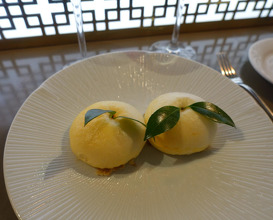 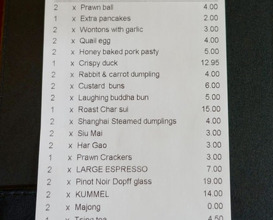 The lunch bill for for 2 with drinks 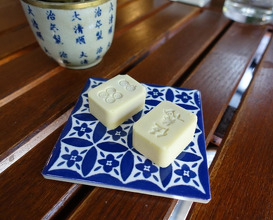