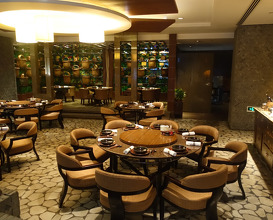 The Grand Hyatt in Hangzou sits literally by the East side of the huge lake that is one of the main attractions to this city.  28 Hubin Road is its primary fine dining restaurant and this visit certainly showed why with its wonderful and intricate selection.  The cuisine is principally from Hangzhou as well as from Suzhou to the north and Huaiyang to the west. Tradition is carefully restored and the food is reasonable here considering the efforts provided: the overall bill for two with wine came to just over CNY 1,440 which equates to roughly £82 per person and is a fair total based on all had including wine.

The technical prize from the whole of this China visit went to the braised ‘Dongpo pork’ which was served with mini chestnut pancakes (akin to mini pita bread).  Imagine the longest streak of beautifully soft bacon but nowhere near as salty yet with wonderful fat content throughout, wrapped into a pyramid shape, layer after layer – this is that.  The idea of eating is to literally unwrap it layer by layer, going around the base at first and the pyramid disappearing the more you unwrap towards the top.

The technical prize from the whole of this China visit went to the braised ‘Dongpo pork’ which was served with mini chestnut pancakes (akin to mini pita bread).  Imagine the longest streak of beautifully soft bacon but nowhere near as salty yet with wonderful fat content throughout, wrapped into a pyramid shape, layer after layer – this is that.  The idea of eating is to literally unwrap it layer by layer, going around the base at first and the pyramid disappearing the more you unwrap towards the top.

Small pieces of pork, cured bamboo shoots and small pok choi are placed in each pancake almost as a mini sandwich and is particularly lovely to have (the succulent pork, the juices from the pork soaked by the pancake, supported by the crunch of the pok choi and acidity of the cured bamboo shoot.  A great combination and flavour all round – bravo.

This ‘Dongpo’ pork is named after the poet and gastronome Su Dongpo who is said to have forgotten about his pork belly braising on the stove while playing a game of chess 900 years ago when the dish was conceived, resulting in a far more tender finish than expecting.  The dish is served ‘Hangzhou’ style, meaning braised in soy sauce and huangjui (wine).  Boiled noodle soup came with sliced pork, bamboo shoots and preserved vegetables. This was an earthy and satisfying dish, the noodles being well done.

Two chicken dishes were tried.  One of these was a signature favourite called ‘beggar’s chicken’ worthy of its own attention.  The dish comes from the neighbouring Province of Jiangsu and is said to have originated in the Qing dynasty when a starving beggar stole a chicken and after slaughtering, hid his loot buried in the ground until he could safely cook.  On returning to his prize, the mud had set all around and in order to get rid of this he set light to it until the mud cracked open – this revealed a beautifully tender chicken which reached the Emperor’s attention and declared it so delicious that it was ordered to be included in the Imperial court.

A nice story and whatever the truth of its origin, the tradition of cooking chicken in clay remains a prominent part of Chinese specialities and in this case, the chicken is marinated in spices, stuffed with mushrooms, wrapped in lotus leaves and then roasted in a (non-toxic) clay pot. This dish has a fun additive in that guests are invited to volunteer to smash through the clay with a huge, wooden hammer.  I probably should have whacked it harder but didn’t want to demolish the chicken inside.  This was indeed a really succulent piece of chicken with the skin satisfying all the way through.  The second chicken dish (also cooked in clay) was served with pork knuckle and was as beautifully succulent as the beggar’s chicken and perhaps with an even more fantastic mix of stock, soy, spices and chicken juices in the bowl.  I thought both of these dishes showcased chicken to levels of succulence and flavour that are surely impossible to improve.

The dessert chosen was chocolate durian cake with caramelised pineapple and chocolate ice cream.  This was pleasantly done, the durian (a very pungent fruit) being mercifully soft but with its aroma and taste pronounced enough.  The chocolate ice cream had a stretchy sponge-like texture in the centre and was fine.

If you see the receipts, you will find this in two parts; this is purely due to the fact that we only just made it in time for lunch with the taxi queue at Hangzhou station being approximately 300m long and thick traffic en route and by the time we arrived, the beggar’s chicken had sold out.  Thankfully it was available for dinner and as we were swinging by again in the early evening, we popped in to have this as an early supper along with the dessert – a meal essentially spread over a very late lunch and early evening with a very expensive tea at a nearby venue further down the lake’s edge in between (beware of the price of certain teas is China).

Wine choices were reasonable with glasses of verve champagne at 19 and a decent enough Chardonnay at 11 which sit perfectly within London prices.   All in all, this is great option as a venue and justifiably popular. 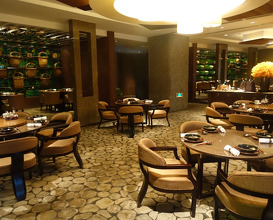 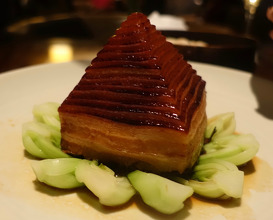 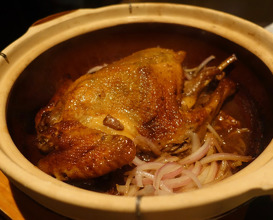 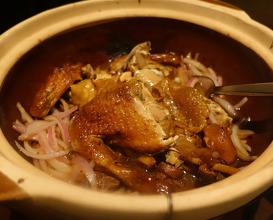 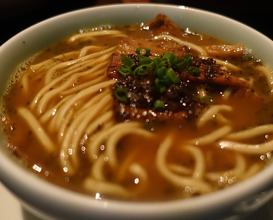 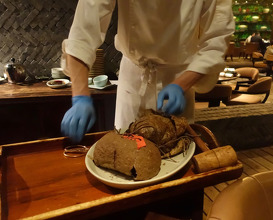 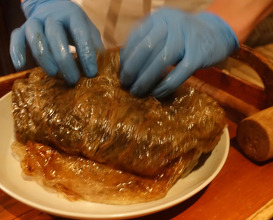 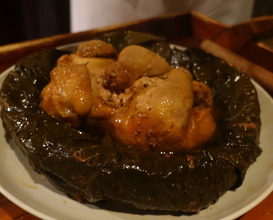 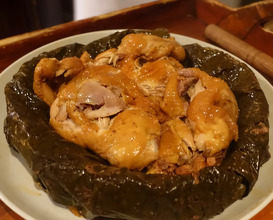 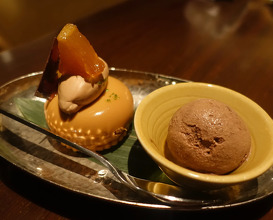 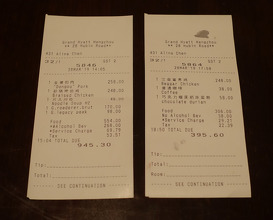