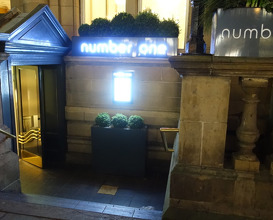 Meal at Number One at The Balmoral Hotel

With its main entrance directly accesible from Princes Street you would be forgiven Number One was separate to the Balmoral hotel.  However, it most definitely is a part of the hotel and is suitably laid out to remind guests they are in a flagship hotel.  This was a highly enjoyable tasting menu with a high level of design from intricate canapes and petit fours to the bread selection and I had one of the best dishes in a long time via their signature cold-smoked salmon dish which was frankly superb.  Serving as an evening, romantic treat as probably its main forte (with no natural light being underground) I believe this could be enhanced even more with a small tweak to their music selection and I would also see this restaurant working for celebration events well.

This was a slick menu, no question.  The canapes that arrived of cheese and welsh rarebit gougères were a good concept and crunchy, but somehow I wanted more moisture.  The liver parfait with delicately thin shell canape left me grinning from ear to ear.  The amuse bouche of Scottish lobster with orange hollondaise was a brilliant varient for the hollondaise but I found I didn’t need the mandarin slice as big as this dominated and drowned the rest of the small elements on the plate for me.

This was a slick menu, no question.  The canapes that arrived of cheese and welsh rarebit gougères were a good concept and crunchy, but somehow I wanted more moisture.  The liver parfait with delicately thin shell canape left me grinning from ear to ear.  The amuse bouche of Scottish lobster with orange hollondaise was a brilliant varient for the hollondaise but I found I didn’t need the mandarin slice as big as this dominated and drowned the rest of the small elements on the plate for me.

The salmon: worthy of a paragraph in its own right.  For one, this was the best dish I had on this weekend that saw me visiting all four Michelin starred restuarants in Edinburgh and for another, it is one of the best dishes I have had full stop.  The salmon is cold-smoked through clever kitchen equipment as the smoke from the woodchips is passed through laboratory kit in order to bring down its temperature.  The effect this has on the salmon is to give it its smokey flavour but reduce the overall oilyness, leaving a protein rich and flavoursome quality without overloading on the fat content.  This, combined with the luxuriously rich quail’s egg gave the dish it sumptuous quailty with perfect balance of salt from the caviar and cod roe and a beautiful judgement of the lemon curd providing sweetness and just enough sharp from the apple matchsticks.  The latter components helped to bring this dish together completely.  The final layer of small chicken skin crisps were a wonderful component to have and these raised the overall flavour to the stratosphere and it really was an utterly superb dish as a result.  I was told that it had taken three years of refinement to get this dish to where it is and my good fortune to catch it its current guise.

The beetroot was very fresh but could done with a bit more cheese or some pickle to make less flat as it simply seemed to need something else, although there was lovely beetroot ice cream to go with this.  The halibut with squid pasta and creamed sauce beneath was refined but did not make me sing truth be told.  However, the fillet of beef, was luxury to the core – perfect jus, beautifully tasty and tender beef, fried seaweed element, and potato in support was excellent.  Pretty darned happy by this stage.

The pre-dessert of kohlrabi custard was quite citric but well designed and had a lovely crunch of the almond slices with light texture of the custard as well.  The almagnac ice cream was not really my bag but the soufflé was great with its supporting banana component serving as a very pleasing add on as opposed to the usual blob of ice cream.  There was no question with the skill here, but I had just too much sharpness for this dessert for me.  The petit fours of rhubarb and custard stretched sugar with sherbert produced childhood memories and was perfectly light enough at the same time.  The chocolate disc was decadent and these rounded off a job very well done by Number One.

Overall I was very pleased with this meal and it was clear that the staff were very much behind the concept of wanting the exprience to be a higher grade of one for the diner.  Numerous satisfaction bells were ringing for the food on this menu and the effort was also clear as a bell.  A couple of things only that I didn’t agree with but overall this was a splendid meal, worthy of being a stamp in the city to do for an occasion of sorts. 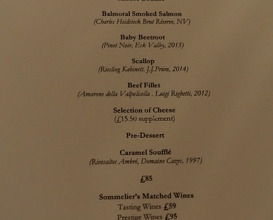 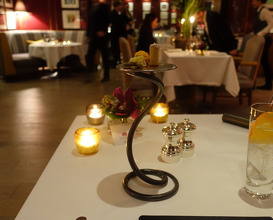 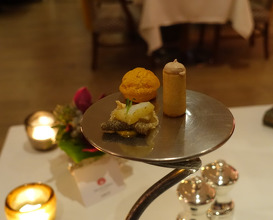 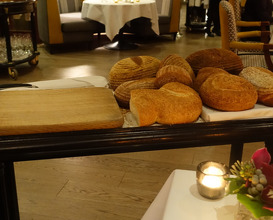 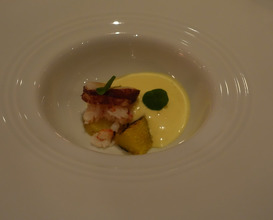 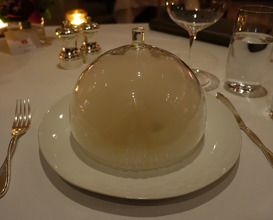 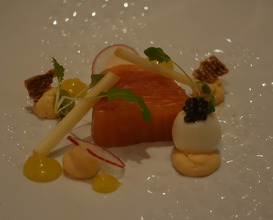 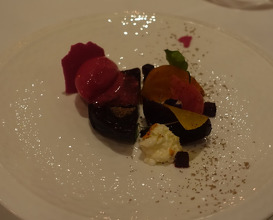 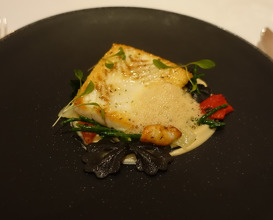 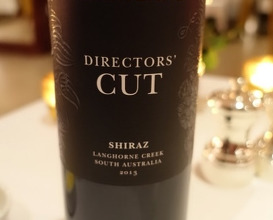 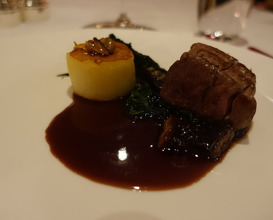 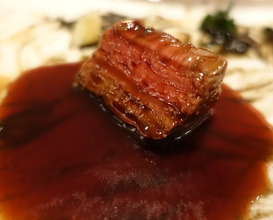 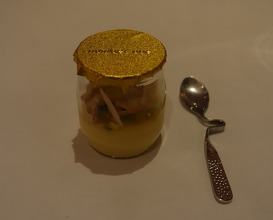 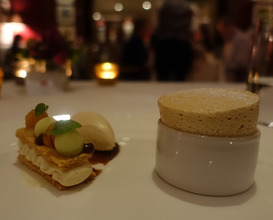 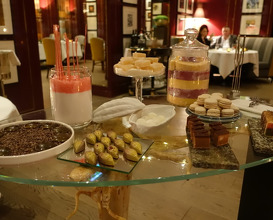 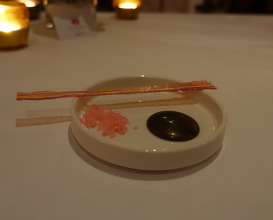 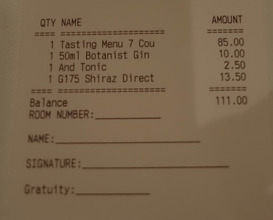